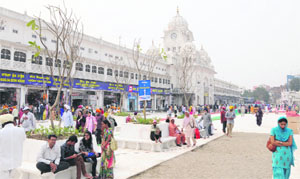 Amritsar, Punjab: The state government may have failed to meet the Diwali deadline for the Golden Temple entrance plaza project, but it has partially opened the plaza for the devotees, which has eased congestion at the main gate of the shrine.

The space which has been thrown open to the pilgrims is almost 30 to 40 per cent of the entire project area. The opened area has provided additional seating facility for pilgrims in the form of benches built beautifully around trees. Besides, the new “jora ghar” (shoe-keeping facility) and “gathri ghar” (baggage room) have also been opened.

Sources said now the temporary “jora ghar”, which was raised to facilitate the plaza construction, would be demolished to make way for more open space. They said though the area opened to the public is yet to be given finishing touches, the work will be taken care of at a later stage.

The sources said the remaining portion of the plaza was likely to be opened in six months or so.

The facilities that are to come up in the basement of the plaza will have to wait a little longer. Among the underground facilities are a state-of-the-art interpretation and information centre for tourists, VIP lounge, bank, ATM, airlines and railway inquiry, a multipurpose hall, security and services area, toilets and other public conveniences. As there is a lot of VVIP movement at the Golden Temple, the plaza will have a separate lounge to accommodate dignitaries and their entourage. An auditorium with a seating capacity of 100-150 persons would be built so that the visiting dignitary could address the media. At present, there is no proper place in the Golden Temple complex where mediapersons can interact with the VIPs.

The plaza has been designed in view of the fact that there are points of high congregation of people around the shrine and they have to be provided with facilities.