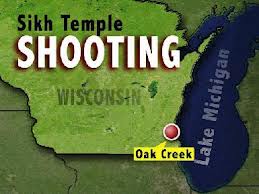 Oak Creek, USA: Brookfield police released its report on the shooting at the Azana Salon & Spa just four days ago, and now — victims of another Wisconsin mass shooting are looking to officials for more information. The final report on the Sikh Temple shooting that occurred in August of 2012 hasn’t yet been released, and now, eyes are turned to the FBI for more extensive information on that other horrible Sunday.

The FBI ended its investigation into the Sikh Temple shooting almost four months ago. All they have released regarding their findings is a sheet of paper. This left the public and some of those who lost loved ones at the Sikh Temple searching for answers.

Kamaljit Sinai still remembers when the FBI completed their investigation into the Sikh Temple shooting. Agents gave him and other members of the Sikh Temple of Wisconsin a timeline of what happened leading up to that horrible Sunday morning when Sinai’s mother, Paramjit Kaur and five others were gunned down by a white supremacist.

However, more has yet to come. After the briefing, the FBI released only a one-page statement. By comparison, Brookfield police released more than 600 pages of information late last week when they closed their investigation into the Azana Salon & Spa shooting. They also turned over never before seen video and images.

And the Azana shooting happened two months AFTER the Sikh Temple shooting.

The statement the FBI released gives some hint as to just how extensive their information could be. It makes mention of 200 investigative leads, 300 interviews and 200 pieces of evidence.

FOX6 News formally requested all FBI documents on the Sikh shooting in December.

Currently, the online FBI records system shows the government is searching for the documents –four months since the investigation ended, and three months since our request.

Milwaukee’s FBI office says all records requests are handled out of the national FBI office. The FBI office referred FOX6 News back to the records website.

All the while, Sinai says he has a lot of respect for the FBI and actually wants to be an agent one day. He says he still hopes for more transparency from his government following such a public and personal tragedy.

“As far as the family, yes we want the answers, but I think the public deserves to know what happened inside the temple,” Sinai said.
Temple members say things like the release of over 100 pages of information about Whitney Houston’s death by the FBI is the type of move that really only rubs salt in the wound.