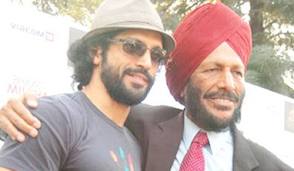 Mumbai,India: Flying Sikh Milkha Singh took just one rupee from Rakeysh Omprakash Mehra to allow him to make a film on his life.

What’s special about the currency note is that it was printed in 1958, the year when the athlete won the first gold medal for independent India in the Commonwealth Games.

The biopic titled Bhaag Milkha Bhaag features actor Farhan Akhtar in the lead role and is slated for a July release.

“We wanted to give a priceless token of appreciation to Milkha ji for letting us tell his story through our film. We looked for that something special for a very long time. Then we finally ended up sourcing a special Re 1 currency note that was printed in 1958,” Rajiv Tandon, CEO, Rakeysh Omprakash Mehra Pictures Pvt. Ltd, said in a statement.

The relevance of the note is that “in 1958 independent India won its first gold medal in Commonwealth Games because of Milkha ji and he also won two gold medals in Asian Games”, added Tandon.

Money was not Singh’s priority — he only wanted Mehra to make the film.

The legendary athlete wanted that “it should be made in such a way that it inspires more youngsters to earn medals in athletics”, said Tandon.

A source close to Singh said, “The legend (Milkha Singh) was extremely moved. It (Re.one note) was like a souvenir for him.”