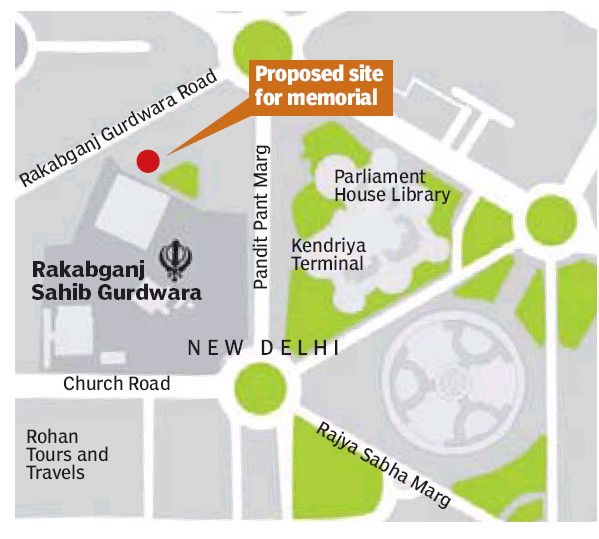 Chandigarh: The five Sikh head priests would lay the foundation stone of the November 1984 Sikh ‘genocide’ memorial in the Gurdwara Rakabganj Sahib complex, near Parliament House, in New Delhi on June 12.

This decision was taken by the Delhi Sikh Gurdwara Management Committee (DSGMC), led by its president Manjit Singh GK, on its 100th day in office on Wednesday. The DSGMC is ruled by the SADBadal, the party in power in Punjab.
The word ‘carnage’ has been replaced with ‘genocide’ in the title of the memorial, said DSGMC general secretary Manjinder Singh Sirsa. “Why not call it genocide, when thousands of innocent Sikhs were mercilessly killed in a planned manner?” he said.

“We would abide by the security norms of the area. The memorial, to be built using stone, cement and steel, would not be more than 22 ft in height,” Sirsa added.

“Even Congress leaders can join us, if they really feel for the Sikhs,” quipped GK. He and other office-bearers of the DSGMC had taken charge on February 26, a month after the Sikh body elections.

“The high-profile area in Delhi would be known for another landmark, keeping alive the pain Sikhs suffered in 1984,” said GK. He hoped that the memorial would be completed in 2014 to mark the 30th anniversary of the genocide.

DSGMC REPORT CARD
During its 100 days in office, the DSGMC approached the Centre for clemency to death-row convict Devinderpal Singh Bhullar. The Sikh body also staged protests after the acquittal of Congress leader Sajjan Kumar in an Sikh genocide case.

The committee has decided to move the SC seeking directions for the constitution of a special investigation team to reinvestigate 1984 genocide cases. The DSGMC also announced a shagun scheme, under which Rs 51,000 each would be paid on the marriage of daughters of committee employees.