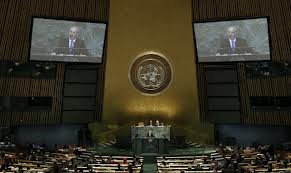 Amritsar, Punjab: Jatinder P Singh, associate director of United Sikh, a Sikh NGO, made history by becoming the first Sikh American to offer prayers at the United Nations 67th General Assembly Opening Session that took place in New York, informed director, United SikhsMejinderpalKaur on Wednesday. She informed that Singh read the Mool-Manter, a composition in the Sikh’s holy book during this interfaith harmony event, while a flute musical accompaniment was being played by Jon Blond, the organizers of this event including the UN President VukJeremic, UNESCO, and the Committee of Religious NGOs aimed to promote messages of world peace said she. She further informed that Singh also read the English translation of an excerpt from Sukhmani Sahib , a set of hymns divided into 24 sections which appear in the Sri Guru Granth Sahib.

He closed the prayer by adding, “I truly hope one day, all the countries can get together at the United Nations and just pray for world peace” informed United Sikh Director. She said that attendees from diverse faiths, organizers of this event, and members of the UN approached Singh after his prayer and shared how they were moved by the positive and uplifting message of peace that was presented in the prayer. “One member was so impressed that she decided to take a copy of the Sukhmani Sahib with her” informed she.

Source: The Times Of India

US Sikhs to lobby Sikh Genocide petition before the United Nations