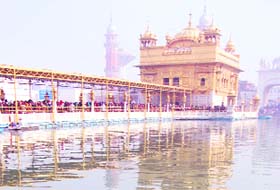 Amritsar, Punjab: Within months of the displacement of traders in Ghee Mandi area near Jallianwala Bagh for a road-widening project, a similar threat looms large over the traders having shops on either side of the Golden Temple’s Ghantaghar entrance.

The SGPC has asked them to vacate their shops to facilitate beautification of the shrine’s main entrance area under the ongoing Golden Temple Entrance Plaza project. The SGPC is, however, silent on the issue of their rehabilitation. The traders who have been running their shops here for decades are a harried lot.

There are 17 shops in the area where traders mostly sell religious books, “kirpans”, portraits and other such merchandise. Besides, there are two banks, a railway ticketing office, SGPC’s information office and its book store.

The traders have been told to vacate shops before December 21. The harried traders had approached Deputy Chief Minister Sukhbir Badal and SGPC president Avtar Singh Makkar to rehabilitate them, but neither the state government nor the SGPC has so far offered any solace to them.

Talking to The Tribune, Parminder Singh, president, Golden Temple Shopkeepers Association, said they had been earning their livelihood through these shops for over four decades. “We continued with our business even during the dark days of terrorism. The SGPC is now out to ruin our lives on the pretext of shrine’s beautification.”

Kuljeet Singh, a trader, said they been doing business here for generations. “Our displacement will also deprive the pilgrims an opportunity to purchase religious items from the premises of Sri Darbar Sahib as our shops are located along the main entrance.” The shopkeepers said on one hand, the government was raising investments and holding events in this regard and on the other it was forcing them to shut their shops.

The traders said if left with no option, they would move the court. They said though SGPC officials had assured them to offer an alternative site at the new plaza, nothing had been finalized yet.

Makkar said the traders had been told to vacate shops to pave the way for beautification of the shrine’s entrance area. But, he refused to comment on the rehabilitation of the traders.