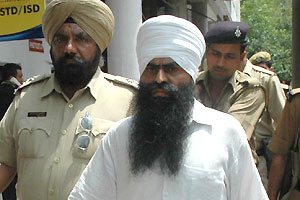 Bathinda, Punjab: Tension prevailed the native village of death convict Devinderpal Singh Bhullar here on Sunday after the mela committee headed by the local Akali sarpanch wanted to go ahead with the scheduled annual cultural programme against the wishes of  majority of the villagers.

The village celebrates two day Baisakhi festival. A religious function is organised on the first day and a cultural programme on the second. After the Supreme Court rejected Bhullar’s mercy plea on friday, villagers observed a black Baisakhi on Saturday saying there would be no celebrations on Baisakhi this year.

However, on Sunday, the mela committee headed by Sarpanch Sukhdev Singh Dhaliwal insisted on having the cultural funcion.

A heavy police force had to be rushed to the village after Bhullar’s supporters objected to the move. Bhullar’s Supporters were also joined by the Bhullar Bhaichara committee.

DSP PR Singh said, “There was a dispute over the festival. The event was called off after both the sides agreed not to continue with it.”