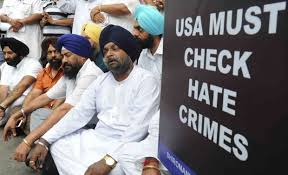 Elderly Sikh man assaulted outside US Gurdwara, one arrested

Comments Off on Elderly Sikh man assaulted outside US Gurdwara, one arrested 517 Views

Washington, USA: In a suspected hate crime, an elderly Sikh man has been brutally assaulted with an iron rod outside a Gurdwara in the US and was in a serious condition, as police arrested a person in connection with the incident.

The incident happened outside a Gurdwara in Fresno which is located in the heart of the Central Valley of California.

The individual arrested for the suspected hate crime has been identified as Gilbert Garcia, the Fresno Police chief Jerry Dyer told a gathering of Sikhs at the Gurdwara where the victim Piara Singh, 82, worked as a volunteer.

Piara Singh was beaten brutally with an iron bar outside the Gurdwara on Sunday morning. Still unconscious, he has 20 stitches, broken bones and ribs. His condition is reported to be improving.

Late in the evening, a Dyer-led team of government officials, including representatives of the FBI and the Department of Justice among others met members of the Sikh community to assure them that they are taking enough measures to protect them from any hate crime.

“This is a hate crime,” said Gurdev Singh Muhar, a priest of the Fresno Gurdwara.

Fresno is located in the heart of the Central Valley of California that has a sizable Sikh/Punjabi population.

The incident has sent shock waves not only among the entire Sikh community in the US, but also among Hindu-Americans and Arab-Americans, who for long have been demanding that attack against them be registered by the FBI as hate crime.

In a statement, the Sacramento Valley chapter of the Council on American-Islamic Relations (CAIR-SV), the nation’s largest Muslim civil rights and advocacy organisation, condemned the brutal attack on the elderly Sikh man.

“We stand with the Sikh community in rejecting the religious and ethnic hatred that leads to such brutal and cowardly attacks,” said CAIR-SV executive director Basim Elkarra.

Condemning the incident, the North American Punjabi Association (NAPA) said Piara Singh was a volunteer at the Gurdwara and performs daily chores there.

The incident took place outside the premises of Gurdwara Nanaksar when he was walking towards his house after performing some morning duties in the Sikh Temple.