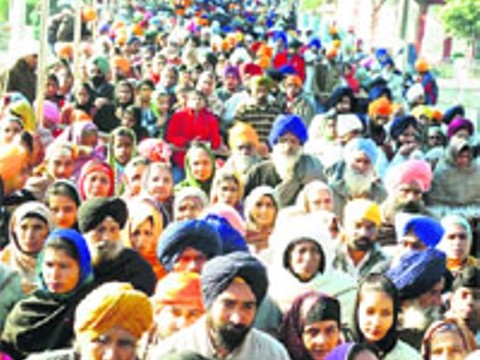 Braving fog and bitter cold, lakhs of devotees, from various parts of the country and abroad, thronged the historic gurdwara here today to mark the 309th martyrdom of the two younger sons of Guru Gobind Singh.

Barricades had been raised so that devotees did not face any inconvenience in reaching the shrine. Setting up kiosks along the road from Gurdwara Jyoti Sarup to Fatehgarh Sahib Gurdwara had been prohibited.

Meanwhile, workers of various parties, including the People’s Party of Punjab, are leaving no stone unturned for a show of strength at their respective conferences tomorrow.

It will be for the first time that the People’s Party of Punjab (PPP) will be holding its conference at the Shaheedi Jor Mela.

Sources said various Panthic issues, including the release of Sikh detainees lodged in various jails, will dominate the conference of the Simranjit Singh Mann-led Shiromani Akali Dal (Amritsar). The Sikh high priests have already issued an appeal to politicians not to politicise the religious event.

Former Deputy Speaker Bir Devinder Singh said today that it was “extremely unfortunate” that the state government had not deemed it important to declared a gazetted holiday on the Martyrdom Day of Sahibzada Zorawar Singh and Sahibzada Fateh Singh. He pointed out that the Badal Government had declared a holiday for much less significant occasions.

“This is an unpardonable lapse by the government. Even the SGPC failed to take note of the lapse and take up the issue with the Punjab Government,” he said.