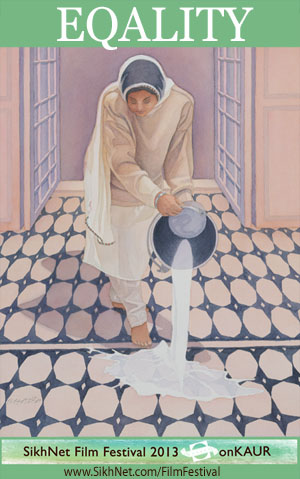 Does everyone seem to be talking about women’s rights recently? Conferences, talks, vigils, kathaas, blogs, counter-blogs, and now the non-profit SikhNet’s recently announced theme for its eighth annual youth film festival: Sikh Women. If not for the current popularity of the theme, why this focus? And isn’t it dangerous to focus on “Sikh women” as a collective group, despite all the differences among different Sikh women? Also, is giving a ‘special’ status to women in fact increasing discrimination, and ghettoizing women’s issues?
In 1469, first Sikh Guru Nanak sahib preached a very new way of life. He challenged the social order of the day and rejected the prevalent culture. Often, to break it down for elementary school kids, we talk about Guru Nanak’s three golden teachings: earn an honest living, share your earnings, and be morally upright. But Guru Nanak required much more of his Sikhs: that they be actively involved in struggles for justice. To sit back and think “I’m a good person — I work, I pray, I share” wasn’t quite enough. Since Guru Nanak, all Sikhs have been expected to care about the culture and society around them. The nine Gurus who followed also continued to exemplify the reality that spiritual upliftment and social involvement cannot be mutually exclusive. For this, many Gurus were declared subversive outlaws (or worse) by the powers of the day and in some instances, killed.

Guru Nanak’s first subversive action came as a very young boy. Most Sikh kids hear the story about when Guruji was standing in his village home, center of attention, for the traditional special family function of his time. His family wanted to tie the janeu on him, the thread tied in religious ceremony on upper-caste Hindu boys. And Guru Nanak rejected wearing the thread. The janaeu discriminated between people, between different caste backgrounds and between girls and boys. By articulating his disagreement to the priest, family, and all their gathered guests—we understand he remained polite throughout, yet still threw everyone in a tizzy — the young Guru taught society very important lessons in equality, solidarity, and voice.

Equality. Oft-cited are Guru Nanak’s words in Asa ki Vaar: “So kyon Manda Aakhiye Jit Jamme Rajan” (Why speak ill of woman, the one from whom even all kings are born?). Perhaps even more powerful and beautiful are the overall deeds and teachings of the Guru through his lifetime that exemplified how the quest for physical and spiritual well-being is not merely the prerogative of men. Guru Nanak’s close relationship with his first true follower, his own sister Bebe Nanki, — beautifully illustrated in Inni Kaur’s Journeys with the Gurus — is yet another example of how his actions spoke louder than most people’s words. And in fact, his actions went contrary to prevailing wisdom. Brothers living in married sisters’ homes is still made culturally unacceptable in most South Asian families. Guru Nanak spoke about Sikh women and related practices, disenfranchisements, and cultural discrimination in the fifteenth century.

So perhaps this trending topic of “Sikh women” is important precisely because it is in fact trending with Guru Nanak?

Solidarity. Guru Nanak didn’t only speak against that which hurt his own biological family — he could have worn the janeu and been merrily on his way. Rather he asked questions: why do some get this supposed honor and not others? What does this mean for those ‘others’? And he realized that those with privilege must carry the responsibility of asking these difficult questions aloud (those without privilege, for example the caste-less during Guru Nanak’s time, often face dire threats for publically asking the same questions.

If we find ourselves thinking that “in our family” or “in my experience” or “in the way my parents raised me” women do not face discrimination or hardship simply for being women, and that therefore this whole discussion is moot, we have missed a serious Sikh lesson. Our family is always our larger family, Sikhs and non-Sikhs alike. (Moreover, if we truly believe our own families are post-gender — that is, beyond any defined roles for men and women that inhibit men or women’s achievement of their full potential — we are likely kidding ourselves; but that is for a separate discussion.) The larger family has diversity. Just as saying “My family has always had shelter and healthcare, so there is no urgency to discuss class issues” or “I have never faced religious discrimination since 9/11, so the whole civil rights theme is misplaced” or “I have never been singled out for the color of my skin, so there is no racism,” would be laughable, and so is the idea that “Sikh women I know never seem to face any special hardship or issues, so let’s discuss something else.” Remember Guru Nanak’s message that simply working hard, sharing some, and being a good enough person isn’t, in fact, enough? Guru Nanak noticed discrimination wherever it existed and stood up for those who perhaps could not stand up for themselves.

Standing up for women’s rights is as essential as recognizing that all women, even all Sikh women, are certainly not alike. Our journeys are diverse, and our stories cannot be monotone, monologue, or monolithic. To stand in solidarity with these different journeys, to respect their differences, and to stand against things that might be threatening some of these journeys is the bigger game that Guru Nanak asks us to play.

Today, Guru Nanak would ask about the high rates of feticide, about domestic violence and about child abuse. But he would also ask some of the things that do not make headlines: the dearth of Sikh women role models at Sikh camps and retreats; the lack of women’s representation on our stages; the imbalance in gurudwara committees, Punjabi schools, and in our homes; the lack of female voices on our dining tables (though not kitchens) as well as on our TV sets. He would ask why out of 190 heads of State, only nine are women.  Of all the parliaments around the world, 13% of seats are held by women. Of full professors around the United States, only 24% are women.

And he would prod us to ask about what we are doing to change this? Do we check the habits that hold back women, including Sikh women?

Perhaps the topic of Sikh Women is trending precisely because Guru Nanak would have so much to say about it?

Voice. Different from mere noise, voice is the learned and deliberate practice of finding the courage to speak truth, to articulate that which might go against prevailing wisdom. The essential lesson about voice that the Sikh Gurus taught was in fact not even about our own voice, but about the voice of others: to be attentive and notice what voices might be stifled or not heard. Guru Nanak didn’t remark “O, I don’t hear lower castes complain about the janeu, so they must not really care about this issue!”

Sikh women’s voices are often both marginal and central to our understanding about Sikhi. The experience of many women is marginal in that women have traditionally been sidelined or at best appear as after-thoughts — in academia, gurudwaras, decision-making and representation — but the experiences of these same women is central because they afford us the opportunity to rethink the trajectory of our community and what we want to get done right.

Christine Littleton has said “feminist method starts with the very radical act of taking women seriously, believing that what we say about ourselves and our experiences is important and valid, even when, or especially when it has little or no relationship to what has been or is being said about us.”

Women of faith have related to this sentiment and at the same time grappled with what feminism means to a woman of faith.

In doing so, Muslim feminist Azizah Y. Al-Hibri has for example remarked, “Why is it oppressive to wear a head scarf but liberating to wear a miniskirt?”

Similarly, Sikh feminists, organized for example in the charitable organization SAFAR: Sikh Feminist Research Institute, are asking how to ensure (first by dealing with everyday inequities and then by making structural shifts) that all women and men have equal opportunity to walk the path towards the spiritual transcendence that the Gurus described for us.

Perhaps the topic of Sikh Women is trending because including these voices is not only fair, but essential and functional: in understanding the mission of our Gurus, in realizing our individual and collective power, in ensuring half of our voices are not simply left out.

Reflecting equality and solidarity in ensuring these voices are included is the first step. It’s an important first step and one to which SikhNet’s film festival will contribute. The next step is not stopping at one film, film festival or discussion about Sikh Women.

Needless to say, if equality, solidarity, and voice don’t translate to Action, then we have missed the point of the divinely inspired revolution that Guru Nanak brought forth. Beyond just articulating the ideal, Guru Nanak and the successor Gurus empowered the most marginalized — turning them into the Queens and Kings that rise after the Panj Piare grace them with Amrit (initiation). The Gurus didn’t ‘give’ us voice (what’s empowerment without effort?), but gave us enough space to find our own voices, informed by equality and fortified by solidarity.

Progress surely requires we don’t use women simply as ‘subjects’ for events and books and papers, but rather recognize women as agents of change. We must realize that far from being too narrow, the topic of “Sikh Women” is dizzingly broad. Sikh women are involved, very centrally, in every aspect of our community in their roles as teachers, mothers, organizers, sisters, mentors, friends, writers, spiritual guides, leaders, wives, and as inspirations.  provided they don’t forget to ask difficult questions, show solidarity with experiences that are not their own, and listen for different voices. It might not be easy. But if it were easy, it wouldn’t be revolutionary.