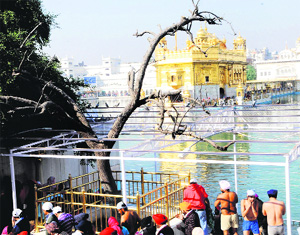 Efforts on to revive dying ‘beri’

Amritsar, Punjab: A part of Dukhbhanjani Beri, the ancient “ber” tree at the Golden Temple Complex having great religious significance, has dried up with hardly any leave left on it.

The tree located on the banks of the holy sarovar now has only trunk and branches left. Though experts from Punjab Agricultural University (PAU) have been maintaining the ancient “ber” trees at the complex, their efforts on Dukhbhanjani Beri are yet to bear fruit.

Talking to The Tribune, PAU expert Dr PS Aulakh said they had given fertiliser and sprayed pesticide on Dukhbhanjani Beri twice a couple of months ago, but it had not shown any result.

He said they were hopeful that the leaves would come on the tree in the next season. He said if that didn’t happen there was no hope. He said they had freed the tree’s surroundings of marble flooring to provide it proper air and water. But, it had suddenly started wilting, he said.

Experts say they had earlier found a part of its roots chopped which might have hampered the necessary intake for its growth.

SGPC secretary Manjeet Singh said they were also planning to demolish the building adjacent to the second part of the “beri” so that it could also get required air and water. He said the rooms where “akhand path” were held under the “beri” were being shifted.

Sacred tree
Dukhbhanjani Beri is considered a sacred place at the holy shrine’s complex. The list of those seeking to hold a “path” at this place is so long that besides commoners, Army officers, chief ministers, film actors, sportspersons and affluent businessmen are in the queue. The bookings for holding a “path” here have already been made till 2020