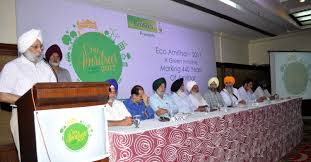 Amritsar,Punjab: EcoSikh, a Washington-based organisation, will launch an initiative to celebrate the foundation day of Amritsar on July 6 by engaging major organisations and grass-roots level bodies to care for the city and its natural resources and preserving its habitat.

“We are confident that our initiative will reinforce the love and care for the holy city,” said EcoSikh president Rajwant Singh. He said: “Time has come that we commit ourselves to this important task of preserving Amritsar’s glory. The city had a tremendous impact on the country’s history in many positive ways and we are sure this will be another great way to inspire and lead the nation”.

EcoSikh had launched an Eco-Amritsar campaign in July last year by bringing major stakeholders of the city together to discuss ways and means to improve the city’s environment. These included the SGPC, Khalsa College, Durgiana Mandir, Chief Khalsa Diwan, the Amritsar administration and various educational institutions and major business outlets.

A committee of Eco-Amritsar has been formed to implement the five-year Eco-Amritsar 2017 plan. EcoSikh will also hire a full-time official to coordinate this campaign. The plan launched last year focuses on creating awareness to preserve natural resources, engaging the government and NGOs to reduce air pollution, improving city’s garbage disposal system and increasing green patches in the city. EcoSikh had also facilitated Amritsar become a founding member of the Green Pilgrimage Network launched at Assisi, Italy, in November 2011.

Previous: CONFERENCE IN THE EUROPEAN PARLIAMENT IN BRUSSELS ON THE DEATH PENALTY AND HUMAN RIGHTS ABUSES IN INDIA
Next: Dal Khalsa welcomes memorial, objects to BJP presence