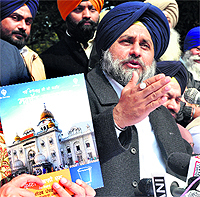 DSGMC poll: SAD (B) manifesto out, tall promises to community

Comments Off on DSGMC poll: SAD (B) manifesto out, tall promises to community 472 Views

Among the main promises are clean and transparent management, judicial commission for Sikh shrines, Guru Teg Bahadur University for professional education, free education for girls and books to boys securing over 75 per cent marks in Class X and Rs 51,000 as marriage allowance for the daughters of DSGMC employees.

Focusing mainly on the youth, the manifesto promises establishment of Guru Angad Dev sports institute, five academies for Sikh students to help them prepare for medical, engineering and administrative examinations and a placement cell.

The party has also assured of replacing books of private publishers with that of the NCERT in DSGMC-run schools and 50 per cent concession in fee for one child in cases where two or more siblings were studying in same school.

The manifesto also speaks about setting up a legal council for helping the victims of the 1984 anti-Sikh riots and the community members uprooted from Afghanistan and Pakistan. It promises similar councils in the fields of education, health and finance.

Sukhbir said the party would establish a ‘Sikh Heritage Centre’ (a multi-media museum) in Delhi and facilitate free bus service to the community members for visiting historic gurdwaras in Delhi. The manifesto promises celebration of gurpurbs and other historic days as per the Nanakshahi calendar.

The party also assured of canceling the “unlawful” agreement signed by the incumbent committee with a private group to run Guru Harkishan Hospital at Bala Sahib gurdwara. The party also promised a ‘Senior Sikh Citizen Card’ to the community members above 60 years of age to provide them free or on-concession health services and other facilities.