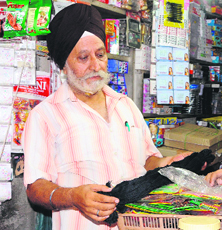 Comments Off on Displaced during Op Bluestar, traders yet to be rehabilitated 440 Views

Amritsar, Punjab: Even as shopkeepers near Jallianwala Bagh, displaced due to a road widening project, are skeptical about their rehabilitation, their apprehensions don’t seem misplaced if one looks at the condition of traders displaced from around the Golden Temple complex following Operation Bluestar in 1984.

These traders have been fighting a legal battle for their rights for the last three decades during which around 40 of the total 133 traders died. Some of them died after contracting diseases during adverse circumstances prevailing after the tragedy while some committed suicide in view of their deteriorating financial condition.

For instance, Rajinder Singh, who owned two shops of artificial jewellery in Shaheed Market, allegedly ended his life by jumping into the sarovar at the Golden Temple in 1993. His wife Manjeet Kaur then took to stitching work to bring up her two sons and a daughter. His sons — Surinder Singh and Jaswinder Singh — frame photographs to earn their living.

A section of these traders are leading the life of penury and barely manage to earn two square meals a day. For instance, physically challenged septuagenarian Daljeet Singh moves on a tricycle in the narrow lanes of the city, selling undergarments to eke out a living. Daljeet Singh ran a wholesale shop of “kara” and “kangha” before the Army operation in 1984. Akin to the shopkeepers near Jallianwala Bagh, these traders too ran their businesses from rented shops in three markets — Shaheed Market, Thara Sahib Market and Bazaar Muniara — prior to the Operation Bluestar.

After toiling hard for almost 28 years their effort finally bore fruit last year when the Punjab and Haryana High Court ordered the allotment of an alternative place for their rehabilitation. The HC had issued directions for the allotment of land near Jain Temple on the GT Road. The government will also extend them aid for constructing shops each measuring 27 sq yards.

Gurjit Singh Bhola, an affected trader, said though they were ready to move to the new location, they should be allotted land as per the Galliara Scheme under which they should be extended concession. “We have seen our near and dear ones dying while struggling for justice. Our young generation too was deprived of proper education. The allotment of land may heal our wounds to some extent, but cannot make us forget the pain and suffering we underwent in the last three decades,” he added.