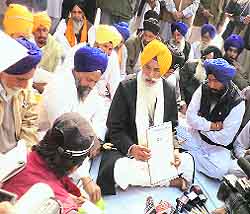 There has been a tussle between a section of Sikhs and dera followers since 2007 when dera chief Gurmeet Ram Rahim Singh made a public appearance donned in an attire similar to that of the Tenth Sikh Guru.

In 2011, the Sikh high priests had awarded “tankhah” (punishment for religious misconduct) to Kauni for attending a dera event at Doda village.

Talking over the phone, he said: “The dera followers had invited me. Since it is election time, some Akali leaders accompanied me.”

On the ticket secured for a dera follower, Kauni said: “Lal Singh is a SAD worker and there is nothing wrong in giving him the party ticket.” Some Congress leaders had also attended the dera function in Gidderbaha, he pointed out.