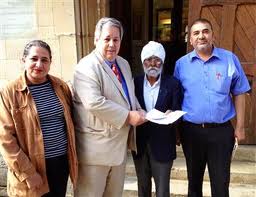 Comments Off on Deputy PM, Nick Clegg keen to ‘Open Doors’ for Sikh Issues to be addressed 488 Views

London, UK: At a private meeting held in the Cabinet Office today, Deputy Prime Minister, Nick Clegg agreed to consider issues raised by the representatives of the Sikh Council, its member organisations including the Sikh Federation UK. He said he was keen to consider the issues and to open doors for dialogue to take place with relevant sections of the Government.

The meeting was attended by five Executive Members of Sikh Council UK and a Member of the Board of Jathedars. They were all also representing their own organisations. The meeting was arranged by the Sikh Federation (UK) to discuss issues of concern to the British Sikh community.

The comments come just one week after Prime Minister, David Cameron praised and thanked the Sikh community in parliament for “the immense contribution it makes to our country” and for “how much British Sikhs give to Britain”.

Gurmel Singh, Secretary General of the Sikh Council UK said, “The views expressed by the Deputy Prime Minister are very welcome and an example of good practice where Sikh Council works together with member organisations in showing strength in unity and working towards positive outcomes for the Sikh Panth. It is exactly the reason why the Sikh Council UK was set up”. The role of the Sikh Federation in relation to this meeting is exemplary and paves the way for further joint approaches involving member and non-member organisations.

It is worthy of note that the comments come just a week after the Prime Minister’s comments during the important Prime Ministers Questions in Parliament.”

Balvinder Kaur Saund, South East Regional Co-ordinator of the Sikh Council UK said, “This was a historic meeting for the UK Sikh community and by Nick Clegg conveying keenness in discussing Sikh concerns he clearly signalled the Governments respect for and willingness to work with the Sikh Council UK.”