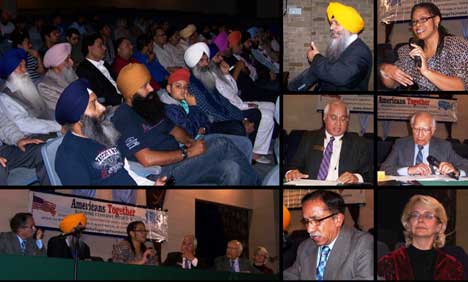 Democracy in India is a farce’

Comments Off on Democracy in India is a farce’ 49 Views

Dallas,Pak: The leader of the Sikhs of America & keynote speaker Dr. Amarjit Singh has said that India called itself a ‘biggest democracy’ which is a farce, adding that even today member of American organization are not allowed to go to Punjab and Kashmir so that their brutality could not be exposed.

Singh was addressing a conference held under the auspicious of America Together Foundation which was organized in the memory of 1984 genocide of Sikh followers.

Dr. Amarjit Singh said that the same treatment, which was given to them in India, is now being given to followers of Buddhism and people of Kashmir.

He said that the wounds they received in 1984 are still fresh because the culprits were not brought to justice.

He said that in 2000 there were circular issued by Indian Army in which it was said the radicals (AmritDharis) should be identified because the people were ‘Antakwadi’ and ‘agarwadi’. However, the Sikh followers are continuing their peaceful struggle even today, he added.

Singh said they do not accept a clause of Indian constitution in which Jain religion has been described as part of Hindu religion.

He also said that Russian secret agency KGB keeps training the Indian RAW.The dirty works are being done in India by RAW and they put blame on ISI

He said that those scenes are still in front of their eyes when in 20 states of India, the Sikhs followers are picked up one by one and burnt alive by hanging the tire around their necks.

He further said that our fight is not with Hindus but the state.

The Sikh nation is waiting for the justice from the International Court because hundreds of people are disappeared whose whereabouts are still unknown, he added.

Gr. Harbans Lal also spoke on the occasion and thanked each participant.

In the meantime, the Bangladeshi speaker Hassan Mahmod said in his address that 41 years ago the Pakistan Army treated the Bengalis in more shameful manner for which officially no apology was extended.

In response to the speech, Shah Alam Siddiqui, a well-known Journalist, said that while we condemn massacre wherever it takes place, yet all the facts should be laid bare fully.

He said that non-Bengalis were killed indiscriminately by Mukti Bahini and also by the Indian forces. Despite this when former President Peevez Musharraf went to Bangladesh he publicly extended apology on that. What else the Banglesdeshi speaker wanted, asked Siddiqui.

Dallas Peace Center Executive Director, Kelly Obazee, reflected on current massacre around the world And Dr. Petra Weldes talked about stereotyping and its effects on the society.

The Chairman of the conference Dr. Harbans laal thanked the speakers and the audience and also media besides the administration of the Gurduwarsa (Sikh temples), situated in and around Dallas who played a major role in making the conference a success. Also the President of the Karakoram Thinker Forum Siraj Butt and other important people belonging to different walk of life participated in the conference.