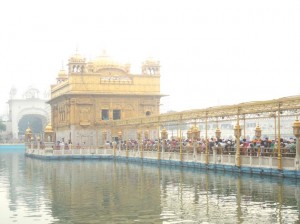 Amritsar, Punjab: we went to Darbar Sahib, Amritsar for darshan of and, as reported in last week’s column, also for a Sikh Council UK follow up meeting with Jathedar Akal Takh Sahib. After about 4 years, when I last visited this most sacred and historical of Sikh shrines, the change in the mix of devotees and tourists was only too apparent. There were vastly more non-Sikhs this time. It was clear that more people from southern India were amongst the “tourists”.

They would have come as site seeing tourists attracted by the fame of the “Golden Temple”, but once they walked down the steps of the main entrance and started walking around the parkarma, so they seemed to be immersed in the spiritual experience of Darbar Sahib, which transcends all creeds and castes. The unique architecture and the Gurbani Kirtan dhunees floating over the Sarowar water inspires all, regardless of their religious background.

The impression gained was that non-Sikhs outnumbered Sikhs. That may not be true because many Sikhs cut their hair these days. There are fewer full identity Sikhs in the villages of Panjab than a decade ago. It is not clear if there is also a hidden message in the increasing number of non-Sikhs converging on Darbar Sahib. The image of Sikhs is changing in both positive and negative ways; but this is not the place to discuss the politics of an increasing number of non-Sikh visitors to Darbar Sahib. The Shaheedi Yadgaar is a reminder that Sikhs can forgive a repentant foe, but they will never forget the shaheeds in their daily ardaas. The wording of the plaque commemorating the Yaadgar is more robust and defiant than one would have expected in present day Punjab.

Polution of Punjab is reflected in the smog cloud over Darbar Sahib as thousands form a long queue for darshan of the Harmandar sanctum sanctorum. Experts tell us that such polluted environment harms not only the people but is damaging for the buildings and artwork also.

It was pleasant experience to meet some leading Khalsa Aid sevadars who are doing well directed seva, educating and providing shelter for the neglected families in Panjab while promoting Sikh identity. Our meeting with Jathedar Sahib on the same day, there was mention of the field seva done by such Sikh charities from abroad.

Visiting Darbar Sahib is a mixed experience. As I watched hundreds of non-Sikhs doing parkarma of Darbar Sahib that day, I did wonder how many justified the army assault of 1984. Darbar Sahib is a reminder of our great heritage and miri-piri ideology. It is a spiritually humbling experience. It is also a reminder that despite all the Sikh sacrifices for the liberation of the Indian sub-continent, the majority Indian community remains unconcerned about the injustices suffered by the innocent victims of 1984 pogroms.

Previous: Nepal Sikhs in a fix over Patna Sahib Jathedar’s directive on kar sewa
Next: Flying Sikh spells out success mantra in language of the heart