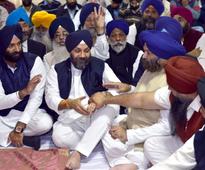 Though the Dal Khalsa appreciated the efforts of the Delhi Sikh Gurdwara Management Committee (DSGMC) for laying the foundation stone of the “1984 Sikh Genocide Memorial” within Gurdwara Rakabganj Sahib complex on Wednesday, the radical Sikh organisation objected to the presence of BJP president Rajnath Singh as the ‘Hindutva’ party itself had blood of innocent Muslims of Gujarat on its hands.

Party spokesperson Kanwar Pal Singh said in a statement that despite various pressures, the DSGMC under the leadership of its president, Manjit Singh G.K., had taken a bold stand to move ahead with the initiation of the memorial for innocent Sikhs killed by the Congress-led frenzied mobs in November 1984. The Dal Khalsa leader was critical of organisers, including Shiromani Akali Dal president Sukhbir Singh Badal, for inviting the BJP leadership.