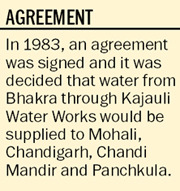 Comments Off on Chandigarh Mayor advises Punjab, Haryana to shift their capitals 444 Views

Chandigarh, Punjab: Upset over not getting the UT’s share of water due to a fight between Punjab and Haryana, city Mayor Subhash Chawla today stirred up a hornet’s nest by advising both the neighbouring states to shift their capitals outside the city if they could not amicably solve the water issue.

Chawla said despite the city being the capital of the two states and a substantial number of state-level offices located here, the two states were not sympathetic towards the city residents’ water requirements. The residents include top bureaucrats and the chief ministers and ministers of both the states, he added.

Addressing mediapersons, Chawla said both the states should agree to the UT’s share of water. In the absence of sufficient water, the city is likely to face an acute shortage of water in the summers, he added.

Recently, at a meeting between the chief secretaries of Punjab and Haryana, the UT Adviser and other senior officials of Punjab, Haryana and Chandigarh, the officials of the Haryana Government had demanded 40 per cent share out of the 80 MGD water from the phase V, VI, VII and VIII of Kajauli Water Works.

Haryana had maintained that they would not allow Punjab and Chandigarh to lift water from Bhakra before fixing Haryana’s share. Haryana had also accused the Chandigarh Administration of reaching a sort of understanding with Punjab, without involving any officers of Haryana, to allocate the entire water of Phase V and VI to Punjab.

No objection to Patil’s speech in Assembly

Mayor Subhash Chawla has no objection to the Punjab Governor and UT Administrator Shivraj V Patil’s speech in the Punjab Vidhan Sabha where Patil had demanded that Chandigarh should be transferred to Punjab. Chawla said Patil delivered his speech as Punjab Governor not as UT Administrator. The BJP district presidents BC Puri, Ravikant Sharma, Devi Singh, Shakti Prakash Devshali and Bhajan Singh Maru strongly condemned the Patil’s statement.