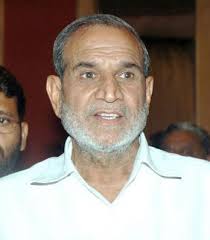 New Delhi: The Central Bureau of Investigation (CBI) on Friday filed an appeal in the Delhi high court challenging the acquittal of Congress leader Sajjan Kumar in a 1984 Sikh genocide case relating to the killing of five members of a family in the Delhi Cantonment area.

A lower court had on May 30 let off Kumar in the 29-year-old case, saying that he deserved the “benefit of the doubt” as key witness Jagdish Kaur did not name him as an accused in her statement given to the Justice Ranganath Mishra Commission in 1985.

The kin of victims have already filed an appeal on which the high court has sought the response of the CBI and Sajjan by August 27. The acquittal had triggered widespread protests by the Sikh community.

“It was a matter of fact that when eyewitness and complainant Jagdish Kaur had submitted her affidavit before the Justice Ranganath Mishra Commission in 1985, she had not mentioned Sajjan Kumar’s name in any manner, though the other accused had been named,” the lower court had said.

The lower court, however, had held five others guilty in the case and awarded varying jail terms for being part of the mob that killed the Sikhs. While former councillor Balwan Khokkar, Girdhari Lal and retired naval officer Captain Bhagmal were given life term, former MLA Mahender Yadav and Kishan Khokkar were given three years’ jail term.