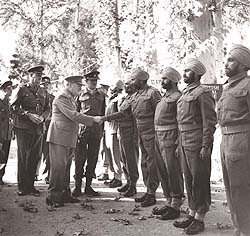 Ontario, Canada: Canada has remembered the sacrifices of Sikhs who served in the armed forces at a solemn function attended by Indo-Canadian MP Parm Gill on behalf of the country’s Minister of Veterans Affairs Julian Fantino.

The programme ‘In Remembrance: The Sikhs’, was hosted by the Sikh Heritage Museum of Canada in Brampton in Ontario province Sunday.

“Our government values and honours the contributions, accomplishments and sacrifices of all veterans, including Sikh Canadians who served with bravery and distinction in times of war, conflict and peace,” said minister Fantino. “During Veterans’ Week, we pay tribute to all Canadian Veterans and continue to honour those who serve our country today in areas of conflict,” the minister added.

Gill said that the Canadian government was “dedicated to commemorating the sacrifices and achievements of the brave Canadians whose legacy is the peace and security we continue to enjoy today.”

“I congratulate groups like the Sikh Heritage Museum of Canada who continue to honour those who have sacrificed courageously defending the ideals and values we share as Canadians,” he added.

The Sikh Heritage Museum of Canada’s objectives are to educate Canadians of the history of the Sikhs through exhibits and lectures.