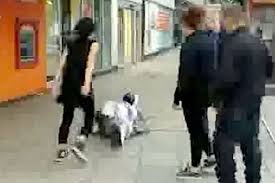 London, UK: A teenaged girl, who was captured on camera severely assaulting an elderly Sikh man in August this year, has pleaded guilty in a British court. Coral Millerchip,19, pleaded guilty at the Warwick Crown Court to assaulting the 80-year-old Sikh pensioner, causing him bodily harm, the Coventry Observer reported yesterday.

The incident captured on a mobile phone showed the pony-tailed girl, accompanied by three young males, kicking and knocking down the 80-year-old Sikh on Trinity Street at the Coventry City Centre on August 10.

The incident was also captured on a closed-circuit television (CCTV) footage. The victim, who suffered a cut nose and swelling, hails from the city’s Canley neighbourhood.

Millerchip also spat on the victim and abused him.

The shocking clip sparked outrage on social networking sites. Millerchip’s lawyer David Murray told the court: “This is a matter which was partially captured on a mobile phone and which was downloaded onto YouTube and received publicity nationally.”

Murray said he had an issue with the prosecution’s plea in relation to a part of the incident which had not been recorded, observing that the accounts of three witnesses differed.

Millerchip also pleaded guilty to receiving a shoulder bag, purse and laptop computer taken in a burglary on July 9 in Coventry.

Murray said he would not ask for a pre-sentence report to be prepared on Millerchip on the assault.

The girl has not applied for bail.