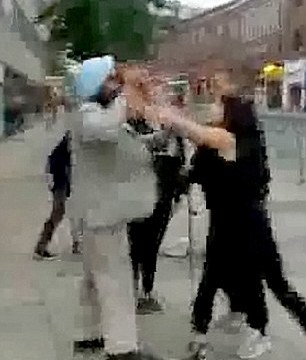 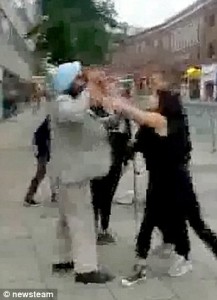 Conventry, UK: An 80-year-old man has died in hospital three months after being assaulted in a street attack caught on camera by witnesses.

Joginder Singh, a Sikh from Canley, Coventry, was treated in hospital in August after being kicked and pushed to the ground by a 19-year-old woman who also knocked off his turban.

Coral Millerchip, whose address cannot be published for legal reasons, admitted assault at a court hearing last month and was remanded in custody.

Mr Singh, a grandfather and dementia sufferer died on Sunday after being re-admitted to hospital with a diagnosed illness.

A post-mortem examination conducted on Monday proved inconclusive and police are awaiting the results of further tests.

Millerchip was due in court later this month for sentencing but detectives have notified the Crown Prosecution Service of Mr Singh’s death and are awaiting a decision on what further steps may need to be taken.

Detective Chief Inspector Matt Markham, from Coventry CID, said: ‘Following the assault, Mr Singh was readmitted to hospital and was being treated for a diagnosed condition and at this stage it is unclear if that is directly connected with the assault.

‘Our thoughts remain with the family and those affected by Mr Singh’s death and we will continue to work with CPS and the coroner to establish the cause of death.

‘Specialist family liaison police officers have been appointed to liaise with Mr Singh’s next of kin and we will continue to support the family at this sad time.’

Detectives expect Millerchip’s sentencing will be adjourned until early 2014.

The horror attack happened in the day on a busy city centre street – Mr Singh was subjected to a sickening attack that was caught on camera and then uploaded to YouTube.

During the battering the frail man is thrown to the floor and spat on.

2013-11-07
SSNews
Previous: Relics of Tenth Guru to be shifted to Keshgarh Sahib
Next: Will monitor langars in holy city: SGPC