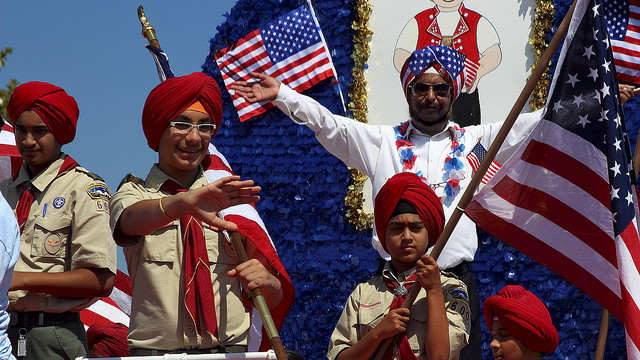 This will provide a significant opportunity for Scouts from various faiths to learn about Sikhs since there are over 2.6 million active Scouts across the US. In turn, it will help in enhancing interfaith understanding and harmony among various segments of society in the country and beyond.

WSC-AR’s recent participation in the National Boy Scout Jamboree at Mt. Hope, West Virginia in July 2013 provided an outstanding opportunity to bring awareness about the Sikh Faith to over 40,000 non-Sikh youth. WSC-AR will continue to collaborate with BSA, in instituting the ‘Sikh Religious Award’.

The Boy Scouts of America has as part of their program developed various religious emblems which encompass many of the major faiths of the world. This is to encourage the Scouts to grow stronger in their own faith. The approval of this program allows emblems/medallions to be worn on the official uniform.

The World Sikh Council – America Region (WSC-AR) is the umbrella organization representative of Sikhs in the United States. It is an elected body of Sikh Gurdwaras and institutions. Currently 51 Gurdwaras and other Sikh institutions across the nation are members of WSC-AR. The major governing purpose of the organization is to represent the collective view of Sikhs in the United States. WSC-AR works to promote Sikh interests at the national and international level focusing on issues of advocacy, education, and well-being of humankind.

2013-11-05
SSNews
Previous: Nepal Govt’ to allow kar sewa of Sikh Gurdwara in Kathmandu
Next: Demi Moore went on a mission to find peace with help of Hargobind Kaur Khalsa