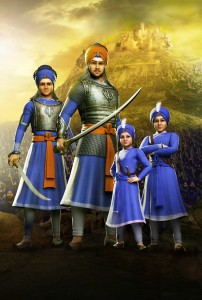 Baweja, who is a Sikh himself, said he was inspired by his Sikh roots and the sacrifice of the Guru’s young lads for Sikhi and he was compelled to make a film on them.

He told the gathered media that the film is being made on a large budget of about 25 Crore rupees ($ 5 million) and that he is seeking NRI Sikh partners in the financing. Although he did not go into details of the investment and return portions but that he was willing to disclose information regarding financing, marketing, distribution and the eventual returns for the film.

But Baweja stressed that the film was not a money-making venture and that he was genuinely inspired by the stories of the Sahibzadas.

“I picked up the pages from the Sikh History which were very dramatic….pages that smouldered my heart and at the same time made me feel proud of the sacrifices of the Four sons of Shri Guru Gobind Singh ji: Baba Ajit Singh Ji, Baba Jujhar Singh Ji, Baba Zorawar Singh Ji and Baba Fateh Singh Ji,” he said.

“These four young sons of Shri Guru Gobind Singh ji stood up with courage, unusual for their ages! But that’s what is extraordinary about the story of these four brothers, bravado so unusual, that I couldn’t resist making a film on them!”

He said martyrdom in Sikhism or Khalsa is fundamental and represents an important institution of the faith. That the history of any religion may be written with pen and ink but the Glorious Sikh History is written with the edge of Sword & the redness of the blood.

“The foundation of Sikhism is very strong, and it is cemented on the supreme sacrifices of its great Martyrs, including The ‘Chaar Sahibzadas’,” said Baweja.

Baweja’s production company Baweja Movies has made more than a dozen films, some critically acclaimed, some award winning, and many blockbusters.

Chaar Sahibzadas is currently in production and Baweja is hoping to release the film next winter in both 2D and 3D formats.

2013-04-21
SSNews
Previous: One hardly finds a rich or affluent person going to the gallows in India
Next: National Union of Students elects its first Sikh on to its National Committee