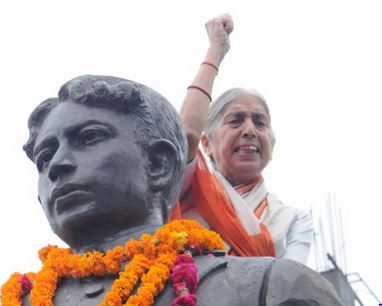 “Illogical statements on the “anti-Sikh riots” (correction – “Sikh Genocide”) after the assassination of Indira Gandhi would do nothing but demoralise the security forces. People from all communities were killed during militancy in the state. Harsimrat should explain why this happened,” Chawla said.

The SAD leader had hit out at Congress vice-president Rahul Gandhi after he shared an emotional account of his grandmother Indira Gandhi’s assassination by her Sikh bodyguards.

Harsimrat had been quoted as saying that members of the Gandhi family paid the price for their deeds. Chawla said terrorists in Punjab were being called martyrs and their relatives were being honoured. “Will Harsimrat describe it as correct?” she asked.

2013-10-28
Guest Writer
Previous: Missing 1885 painting of Faridkot Sikh ruler ends up in auction in UK
Next: The Last Killing