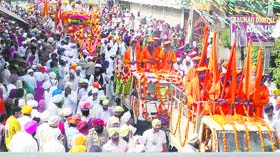 Batala, Punjab: Gurdwara Kandh Sahib, seeped in a rich tapestry of Sikh history and culture because of its pious connection Guru Nanak Dev, was the cynosure of a million eyes as devotees thronged the place to pay obeisance on the occasion of the 526th marriage anniversary of the Guru.

Among the devotees was 100-year-old Nand Singh who travelled from Dala village in Gurdaspur district to be part of the sacred event. He stood in the serpentine queue for four hours, was heckled and jostled by the crowd, but he kept his nerve. “Keep calm and praise the Guru,” was what he kept on saying till he managed to pay obeisance at the gurdwara.

Sources said nearly two lakh pilgrims took part in the festivities which over the years had earned the sobriquet of “Babe da viah”.

SSP SS Mand said the town had been divided into seven zones with each zone being looked after by a DSP-rank officer. Pickpockets had a difficult day as the district administration had installed CCTV cameras at various strategic points.

Previous: SGPC wakes up to woes of Sikhs abroad
Next: SGPC urges PM to take up Quebec’s proposed bill with Canada