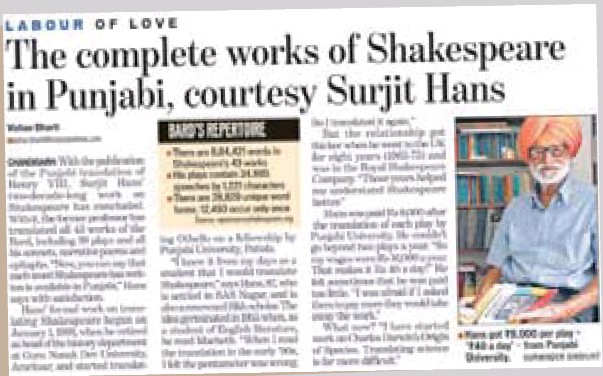 Chandigarh: The man who translated William Shakespeare’s complete works, including 38 plays, into Punjabi was honoured in the Bard’s land on Sunday night.

Prof Surjit Hans, who worked on the translations over a period of 20 years, received a bust of Shakespeare at the Ealing mayor’s parlour in London.

Talking to HT on the phone from London, Hans said this honour was the most close to his heart as it came from the land which gave Shakespeare to the world. “In London, people were overwhelmed to know that an old man from a faraway place had translated Shakespeare’s entire works,” he said.

Hindustan Times was the first to have reported in February this year that Hans had translated Shakespeare’s works. The story was followed by various newspapers and news channels across the world, especially the British media. The Australian Broadcasting Corporation (ABC) and BBC Radio had made short features on Hans.

His formal work on translating Shakespeare began on January 1, 1993, when he retired as the head of the department of history, Guru Nanak Dev University, Amritsar. The work started on a fellowship offered by Punjabi University, Patiala.

Hans is currently translating Charles Darwin’s ‘The Origin of Species’ into Punjabi. Hans, who also worked as a postman at Heathrow (UK) in the 1960s and 1970s, was paid Rs 8,000 per play by Punjabi University, which has also published all volumes of his translations.