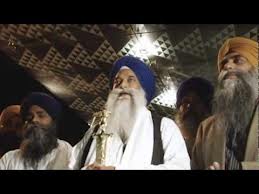 New Delhi,India: Amid demands for according more respect to women in the wake of nationwide outrage over the horrific gang-rape of a girl in Delhi recently, the Akal Takht Jathedar today favoured a ban on use of vulgar language in gurdwaras.

“Foul language should not be allowed to be used at religious places,” Gurbachan Singh, the Jathedar of Akal Takht, the supreme temporal seat of the Sikhs, told PTI.

“We should follow the teachings of our Gods and foul language should not be allowed to come anywhere near religious places,” the Sikh priest said.

Asked about issuing of an edict in this regard, he said “I will discuss this suggestion with other Sikh priests before issuing a ‘hukamnama’.”

Some Sikh organisations today wrote to the Akal Takht Jathedar for issuing an edict to prohibit use of foul language in gurdwaras under a new initiative – “Gurdwara Sudhar Lehar” — launched in the national capital.

Harvinder Singh Phoolka, a senior Supreme Court lawyer who is the convener of the new initiative, said “in 2013, we should follow Guru Nanak Dev’s teachings to accord respect to women.”

“Let us resolve we will neither use any vulgar language against women nor will tolerate anyone using it,” he said in the letter.  Among others who are part of the campaign are former CBI Director Joginder Singh, former Ambassador K C Singh, Maj Gen M S Chadha, former Vice Chancellor Anup Singh, writer Ajeet Kaur and painter Arpana Caur.

Some Sikh organisations are also supporting the suggestion.

To improve the management of gurdwaras and free these from political interference, many Sikh organisations had started ‘Gurudwara Sudhar Lehar’ campaign in the capital recently.