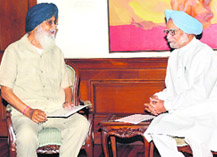 Badal further questioned the rationale behind not hanging anyone for the 1984- anti-Sikh riots so far. The Shiromani Akali Dal in a memorandum submitted to the Prime Minister said: “In the overall national interest and in the interest of peace and communal harmony in the country, death penalty may be commuted to life imprisonment.”

We firmly believe that while the law of the land should be upheld, it must be seen to have been upheld uniformly for everyone and for all sections of society.

Badal while speaking to mediapersons after meeting the Prime Minister buttressed the argument in favour of “clemency for Bhullar”. The judicial verdict against Bhullar was not clear. One of the three judges of the Supreme Court had dissented when deciding on the conviction, meaning the case was not “beyond all reasonable doubt” as mandated under the Constitution. The conviction itself was based on a confession made in police custody, he said.

The Indian Government had promised Germany, from where Bhullar was extradited, that he would not be hanged. Further, the health of the convict – who is admitted to a hospital on account of mental illness – does not merit his hanging, Badal said adding that “Bhullar’s is a special case due to the circumstances and cannot be clubbed with others”.

“This is the BJP thinking. It does not mean it is ours.”

Former president of the Delhi Sikh Gurdwara Management Committee Paramjit Singh Sarna on Monday petitioned President Pranab Mukherjee on behalf of Devinder Pal Singh Bhullar seeking mercy and commutation to life sentence. “The conviction is solely based on the confession obtained by the police under coercion and torture,” the plea said.

On if he would file a fresh mercy petition with the President and whether or not the Shiromani Gurdwara Parbandhak Committee (SGPC) would join forces with the SAD on the issue, Badal said: “I have sought time from the President to file a mercy petition and the SGPC will also file a plea.”

Bhullar’s hanging would affect the sentiments of the people of Punjab, Badal said.

Badal, who was accompanied by Deputy Chief Minister Sukhbir Badal, said in the memorandum to the Prime Minister: “We firmly believe that while the law of the land should be upheld, it must be seen to have been upheld uniformly for everyone and for all sections of society.” Sources said this was in reference to the fact that no one had been punished for the 1984 anti-Sikh riots. The Punjab Chief Minister requested the Prime Minister to approach President Pranab Mukherjee to stay Bhullar’s execution and get his death penalty commuted to life imprisonment.