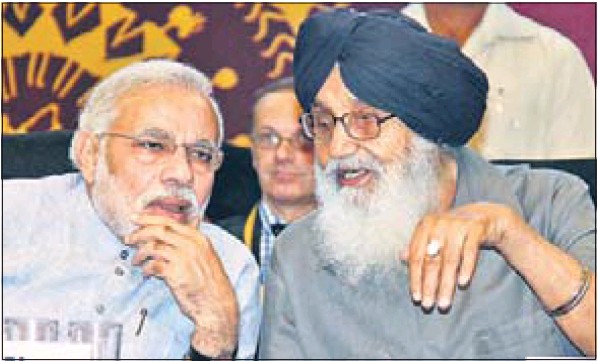 In the be ginning of his address at the inaugural session of ‘Vibrant Gujarat Global Agriculture Summit-2013’ here, Badal said, “I thank the greatest leader of the country and Gujarat chief minister Narendra Modi for organising the first-of-its-kind summit to address the problems of the country’s farmers.”

“Gujarat is the state which gave birth to Mahatma Gandhi, which gave us Sardar Patel and now it has given “Sardar” Modi to our nation,” said the Shiromani Akali Dal leader.

Badal announced that a similar summit would be held in Punjab next February.

In his half-an-hour-long speech, Badal attacked the Centre for ignoring farmers. “For past many years, farmers and agriculture have become the most neglected in our country,” he said.

“No chief minister is being consulted before taking decisions on farmers’ issues. Every support price for farmers’ production is decided by the Centre. Don’t forget that you will need farmers in future too. What will you do then?” he said.

No Sikh farmer to be displaced: Modi
Modi assured Badal that no Punjabi or Sikh farmer from Kutch would be displaced at any cost. Modi clarified that the crisis was based on a circular issued by the Congress government of Gujarat in 1973 that if an agriculturist from outside bought agricultural land in Gujarat, he would be declared a non-agriculturist.

“Some people are trying to malign the Gujarat government by spreading rumours that my government is discriminating against Sikh farmers,” Modi said.

He assured Badal that though the issue was sub judice, his government was committed to safeguarding the interests of Sikh farmers, and there was no question of their eviction.
Modi lauded the role played by Punjabis in socio-economic development of Gujarat. He said that of the 784 families settled in Kutch, 245 belonged to Punjab.

However, a Sikh farmer told HT on phone that politicians couldn’t be believed till they kept their promises.

Previous: SAD working in “connivance” with “saffron powers” to damage Sikh tenets, says Dal Khalsa
Next: Half of Americans believe Sikhism is an Islamic sect