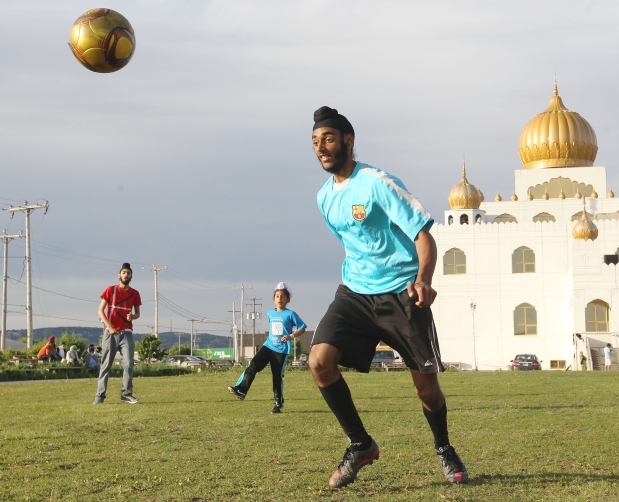 “Children and their families shouldn’t have to choose between their religion and playing organized sports,” a “deeply disappointed” Nina Grewal, the Conservative MP for Fleetwood-Port Kells, said in a statement.

“I therefore hope that the Quebec Soccer Federation amends its stand and lifts the restriction on Sikh soccer players.”

“I want to urge the Quebec federation to reconsider,” said Sims, her party’s multiculturalism critic.

The Quebec federation was suspended Monday from the Canadian Soccer Association, prompting an angry separatist Premier Pauline Marois to accuse the national body of interfering in an “unacceptable” fashion inside Quebec.

The patka, a thin piece of cloth worn by young Sikh men and boys that works like a hairnet, isn’t a “safety issue” as argued by the Quebec sports body, Sims argued Wednesday.

“As a matter of fact, you could argue that wearing the patka provides greater protection because the hair won’t be loose.

The issue, highlighting Quebec’s divergent approach to multiculturalism and the place of religion in society, has stirred a national debate and has drawn international media attention.

Some critics have suggested that Mulcair’s comments are too mild, especially when compared to those of Liberal leader Justin Trudeau and Immigration Minister Jason Kenney – two politicians who have aggressively wooed the politically influential Sikh community.

Trudeau called the Quebec position “wrong” and defended the Canadian federation’s suspension of the Quebec body, while Kenney called the ban “ridiculous.”

Sims called criticism of her party “misinformation” and an attempt to “rewrite history.”

She noted that the party’s Quebec MPs have worked mostly behind the scenes, at the request of the Sikh community’s leadership concerned about excessive media exposure, for close to a year in hopes of resolving the dispute.

Both Mulcair and Conservative Sport Minister Bal Gosal said Wednesday they believe, after their own private discussions with the Canadian and Quebec bodies, that a settlement will be found.

“I am very optimistic that despite everything, that adults can find a solution so youth can play soccer regardless so of their religion,” Mulcair told reporters.

Sandhu took the same position, telling The Sun: “Adults should find a solution so kids can play. This has gone too far.”

The NDP has also written to the International Federation of Association Football (known by its French acronym FIFA), based in Switzerland. The April letter asked why FIFA, which neither permits nor explicitly bans religious headgear, decided last year to let women and girls wear head scarves, but didn’t extend that right Sikh males who wear the turban or the smaller patka and keski headgear.