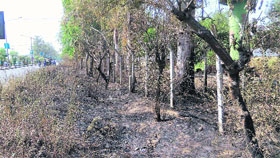 Amritsar, Punjab: Even as various city-based organisations observe World Environment Day tomorrow, the ongoing practise of burning crop residues in the rural belt, especially surrounding the holy city, coupled with occasional burning and removing of trees and shrubs within the town to pave way for development works or commercial purpose, is wreaking havoc on the flora and fauna here.

Recently, many trees, shrubs and green vegetation on the stretch of the Airport road from Hartej Nursing Home to the Gumtala bypass were found burnt. This move by unidentified persons has infuriated the city-based environmentalists and vigilant citizens, but the response of the local authorities is casual.

“International bodies have floated various days dedicated to nature and environment to make the public aware about the deteriorating environment conditions. However, it is important that the message is well taken and implemented in real life,” said Dr AL Adlakha. “Over the years, various educational institutes and organisations have dabbled in holding rallies and seminars, but its impact will only be visible in the long run,” he said.

Several trees on the Mall road and surrounding lanes fell one by one. It was shown that they fell naturally, but it was not the case, averred Executive Director of Mission Aagaaz Deepak Babbar. He said owners of showrooms deliberately burnt garbage around trees to make their base weak so that they eventually fall. He claimed that the trees that obstructed the façade of these showrooms were chosen. He favoured strict implementation of law to curb the menace of burning trees, shrubs and vegetation.

Earlier, in the name of progress, trees were uprooted at Durgiana Temple, Saifuddin Kitchlew chowk to raise a flyover, at Rajasansi to widen the Airport road and at the Tarawala pul to raise a new flyover.

Environmentalists are of the view that the urban green vegetation plays a vital role in the ecology of human habitats, as these filter air, water, sunlight, provide shelter to animals and recreational area to people. They moderate local climate and assist in conserving energy.

He said a meeting was organised by Mission Aagaaz in this regard to mark World Environment Day. The members reviewed the progress made by the government in promoting the green cover and curbing anti-environment activities like burning of field waste by farmers and a large-scale burning of wild grass in the city.

He said the civic authorities were requested to curb the practise of burning waste. He said fully grown trees were being cut or burnt mercilessly and opined that until and unless a concrete policy was formulated to protect the trees, there would be no fun of planting new saplings, as they, in no way, could match the abilities and functions of fully grown trees.

“We mark this day as a protest against the mindless and brutal attitude of the residents of the city. Although the children have developed sensitivity towards green lungs and other precious natural resources, elders are still little conscious about the environment,” said Gurbhej Singh Sandhu, general secretary of the mission.

However, in this scenario of indifferent approach, Baba Sewa Singh Khadur Sahib Wale stands out for his magnanimous contribution towards environment. He has been instrumental in planting trees and till now, he has planted three lakh saplings covering the area of 300 km, including roads, public places and gardens across the state. He said environment deterioration was a major concern.

It is noted that Kaar Sewa Khadur Sahib launched a campaign for environment conservation in 1999 to commemorate the birth anniversary of Guru Angad Dev (2004). Under this drive, different varieties of trees have been planted besides roads, in parks, public places and villages of Punjab, Delhi, Rajasthan and Madhya Pradesh in allegiance with the government as well as NGO.

In the name of development 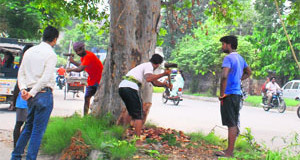 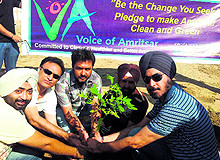