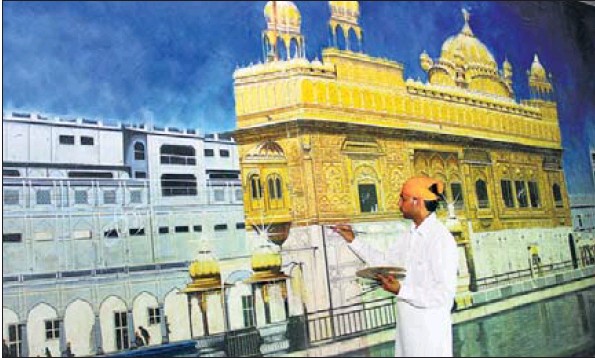 Artist’s ambitious project may get fillip from CM

“He was impressed with my work and told me that he will arrange for help through funds,” says Ashok, whose ambitious project has already used around Rs 5 lakh.

CM’s assurance has sparked a ray of hope for Ashok, who hopes to hear from him soon.

Work on the painting, he laments, had to be abruptly stopped when funds ran out a couple of years ago. “It has already used over 1,300 pencils, 4,500 small and big brushes and gold dust. For the remaining work, I need at least Rs 5 lakh more,” he says.

Having survived on help from a few local patrons so far, Ashok has now been struggling to find sponsors to finish his long-pending project. The painting, he says, is almost in its last stage.

Interestingly, Ashok says that it was because of a dream that he embarked on the ambitious project. “I had a dream a few years ago that I was painting Harmandar Sahib. I saw that as a message from God,” says Ashok, who, as a class-4 employee at the Ludhiana municipal corporation at that time, set off on the journey to fulfil “God’s wish”. Earning a modest Rs 1,000 a month then, Ashok bought a 56 x 15 feet canvas worth Rs 48,000, from money raised from donations and his savings. “When I began, I was highly encouraged by people, and I assumed I would carry on with their help. But I can’t survive on compliments alone,” he says. Apart from finances, Ashok has faced the problem of finding a suitable space to keep the huge painting that has seen many temporary homes such as gurdwaras and schools.