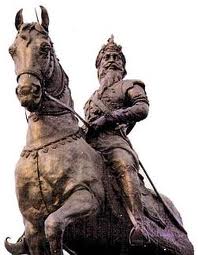 Comments Off on Amritsar Treaty goes under hammer in UK for Â£ 3,400 670 Views

London, UK: A 204-year-old copy of Treaty of Amritsar, which dates back to 1809, went under hammer during an auction by Mullock’s Auction House in United Kingdom (UK).

The treaty dating back to days of British East India Company was sold for over four times its estimate at an auction of rare historical documents.

The treaty signed between founder of Sikh empire, Maharaja Ranjit Singh and East India Company’s Charles T Metcalfe in 1809, was bought by an anonymous bidder for £ 3,400.

Richard Westwood-Brookes of the Mullock’a Auction House said, “We are honoured to be selling this rare document. The Amritsar treaty was very important in the foundation of the great empire Maharaja Ranjit Singh had built.

Treaty of Amritsar is highly significant document of pre-independence history.

It is known as Treaty of Amritsar because it was signed here in the city which was the summer capital of Maharaja Ranjit Singh.

The Treaty laid the ‘perpetual friendship’ between the British government and the State of Lahore. It highlights the sovereignty of the then Indian state, headed by the Sikh ruler that the British shall have no concern with the territories and subjects of the Maharaja to the north of river Sutlej. It further lays that State of Lahore shall not commit any encroachment on the possessions Sutlej States which were then controlled by the English.

The treaty had invited lots of interest amongst historians. Some say it had shattered Ranjit Singh’s dream of establishing Sikh supremacy over the territories between Jamuna and Satluj rivers as the extension of his power beyond river Satluj was prevented following its implementation. But there is other theory that under those circumstances, signing of the Treaty was the most advisable for Maharaja Ranjit Singh and decision he took was politically correct to save himself from the ever rising British and he concentrated on areas now part of Pakistan and Afghanistan.

Apart from the Amritsar Treaty, other historical documents and photographs related to Punjab were also auctioned including a stamp with Maharaja Ranjit Singh’s image and and an early watercolour of a Sikh Guru which fetched £ 440.

Other key items included a large collection of rare and early Sikh books in English and Punjabi, mostly out of print and some dating back to the early 19th century, which raised hundreds for the auctioneers.