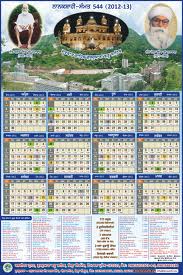 Fatehgarh Sahib,Punjab: President of Delhi unit of Shiromani Akali Dal (SAD), Manjit Singh GK, said the amended Nanakshahi calendar would become current in the gurdwaras of Delhi from now onwards.
A strong contender for the post of Delhi Sikh Gurdwara Management Committee (DGSMC) chief, Singh said in Sirhind on Sunday, “Akal Takht is supreme so all the directions of the Takht will be implemented in true spirit.”

Authored by Canadian Sikh scholar Pal Singh Purewal, the Sikh calendar called the Nanakshahi calendar, was adopted in 2003, with the aim to fix the dates of gurpurabs and other Sikh religious festivals; the dates for these holy days otherwise varied according to the traditional Bikrami calendar.

In January 2010, the Akal Takht had approved amendments to the calendar. In 2011, the executive body of DSGMC had adopted a resolution and issued an appeal to Sikhs across the world to adhere to the Nanakshahi calendar adopted by Akal Takht in 2003 and not its amended version.

The DSGMC had termed the amendments as “unconstitutional and unscientific”