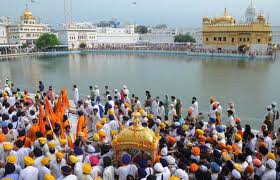 Amritsar, Punjab: In an initiative aimed at checking the disrespect of saroops (copies) of Guru Granth Sahib and subsequent clashes, Akal Takht is considering a a proposal to centralise and computerise the information pertaining to distribution, upkeep and maintenance of copies of Guru Granth Sahib distributed by the SGPC.

Akal Takht chief Giani Gurbachan Singh said that Akal Takht was in the process of getting the system in place.

On the anvil are proposals to make registration compulsory for whosoever takes a copy of Guru Granth Sahib, six-monthly status report about its upkeep as per maryada, a comprehensive undertaking from the receiver of the copies to ensure proper maintenance, screening of the prospective receiver on the touchstone of spiritual requirement before giving the copies and most significantly assigning a specific code to each copy.

“There will be a specific code for each saroop and it will be there on each ang (page). It will also be invisible to the naked eye,” Sukhbir Singh, a lecturer in Electronics and Computer Engineering at RMIT University Australia who has been assigned the job to give practical shape to the project, told The Indian Express.

“This specific and invisible coding would help us locate the copy in case an ang (page) is found. It will help us fix responsibility. At present, if any ang is found, it is difficult to ascertain the saroop to which it belongs,” he added.

“Anybody who takes a saroop of Guru Granth Sahib will give feedback about its upkeep, as per maryada, every six months. The report will be updated in the centralised computer system and in case anyone fails to update the information, the computer will give a prompt, following which the receiver will be contacted,” Sukhbir Singh said, adding there would also be a complaint centre where persons can call if proper care of Guru Granth Sahib is not being taken

“Then there will be a comprehensive undertaking from anyone who gets the saroop with a declaration among other things that the saroop could be taken back if that person failed to upkeep it as per maryada,” he added. Singh also said that before giving saroop to anyone, the credentials of that persons would be screened. “There will be a kind of interview to check their eligibility before giving the saroop,” he added.