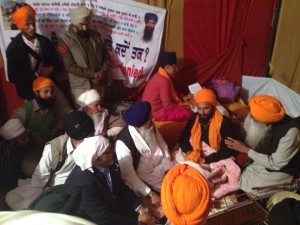 The SGPC chief also held talks with the representatives of the United Sikh Forum, a conglomerate of Punjab Human Rights Organisation, Akali Dal (Panch Pardhani), Dal Khalsa, Damdami Taksal (Baba Ram Singh), Lawyers for Human Rights International, Khalsa Panchayat and the Sikh Youth of Punjab, assuring them that he would take up the demand with the ruling SAD leadership.

The Akal Takht jathedar visited Gurbakhsh on Sunday night, holding talks with the activist for about 15 minutes on the possibilities of the release of such detenues with the intervention of the Punjab government.

These organisations have been supporting the 47-yearold Gurbakhsh, who has sought the release of at least five such prisoners.

These are Lakhvinder Singh, Gurmeet Singh and Shamsher Singh, in Burail jail for the past 18 years in a case of the assassination of former Punjab chief minister Beant Singh; Lal Singh in Nabha jail and Gurdeep Singh in a Karnataka jail, as they too had completed 20 and 23 years of imprisonment respectively, under TADA.

The Dal Khalsa has given a call for a protest march from the Akal Takht in Amritsar to Gurdwara Amb Sahib in SAS Nagar, beginning on Wednesday for eliciting mass support for the release of all such prisoners who were still behind bars after the completion of their imprisonment period.

Former Punjab DGP Shashi Kant also addressed the United Sikh Forum congregation at the venue of the hunger protest on Monday, terming the demand for the release of these prisoners as “a humanitarian issue”.

“They (the Sikh religious bodies) had extended support to my anti-drug campaign, and I am with them on this issue,” he said.

Shashi Kant had also visited the protest venue on Sunday.

“Why are they still languishing in jail, if the law is same for all?” he asked.