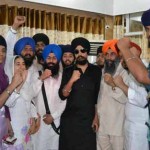 Chandigarh, Punjab: It is learnt that the All India Sikh Students Federation declared on July 17, 2013 to start construction of memorial at Hondh-Chillar on November 2, 2013 in the memory of Sikhs massacred in this village during November 1984 Sikh genocide.

Karnail Singh Peermohammad, president of AISSF (Peermohammad) reportedly said that he would be meeting Giani Gurbachan Singh July 18, 2013 at Amritsar to appeal him to start construction of the memorial by November 2, 2013; otherwise the AISSF would act on its own to take up the construction works at the site where the foundation stone was laid by Giani Gurbachan Singh on March 06, 2013.

AISSF (Peermohammad) president said that his organisation had been unearthing the Sikh Genocide sites and collecting evidence related to 1984 Sikh killings. He alleged that the Congress party had perpetrated violence with genocidal intentions against the Sikhs in 1984.

He said that the Hondh-Chillar massacre came into light about 27 years after the occurrence of the massacre, when the Sikh houses were torched; 32 Sikhs were killed and the Sikh village was completely destroyed.

The village Hondh-Chillar near Rewari (Haryana) was attacked on November 2, 1984 in an organized and well planed manner.

It’s only after the Sikh organization moved the Punjab and Haryana High Court the High Court appointed a commission of inquiry headed by Justice T. P. Garg. The commission is yet to submit it’s report.