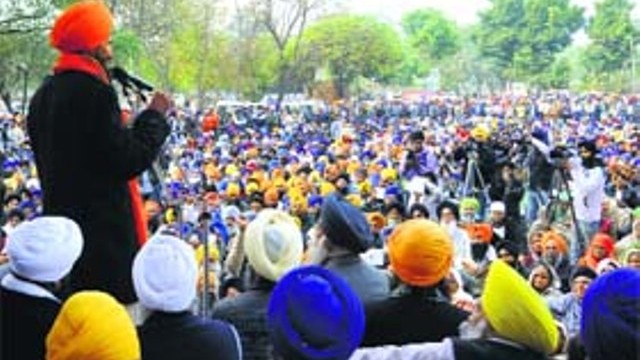 Mohali, Punjab: Gurbaksh Singh Khalsa, on an indefinite fast at Gurdwara Amb Sahib here to seek the release of Sikh detainees in various jails, is reported to have developed “symptoms of pneumonia”.

Gurbaksh Singh, whose fast entered the 40th day today, was taken to Fortis Hospital. He has been shifted from a tent on the gurdwara premises to the shrine’s meeting hall.

Harpal Singh Cheema, acting president of the SAD (Panch Pardhani) and member of the organising committee of Sikh Bandi Rihayi Lehar, said Gurbaksh Singh refused to take medicine and, hence, was not hospitalised.

Reliable sources say Chief Minister Parkash Singh Badal has directed that a team of doctors from Fortis be sent to take care of Gurbaksh Singh.

Meanwhile, Gurmeet Singh, Lakhwinder Singh and Shamsher Singh, lodged in the Burail jail, Chandigarh, in connection with the Beant Singh assassination case, could not be released on parole this evening because the IG (Prisons) reportedly refused to exercise his powers in this regard.

Sources said he wanted the recommendation of the UT Administrator, who is also Punjab Governor, for releasing the three inmates.

The Burail jail authorities have reportedly sent a letter to the Patiala Depty Commissioner regarding parole for Lakhwinder Singh and Shamsher Singh. Sources said the Patiala Deputy Commissioner has sent a report to the Punjab Government, stating that the administration had no objection to the release of Gurmeet Singh on parole.

Meanwhile, a Panthic sammelan, to extend support to Khalsa’s cause, was held at Gurdwara Amb Sahib here. Among those present were representatives of the Sant Samaj , Damdami Taksal and Dal Khalsa.

Congress spokesperson Sukhpal Singh Khaira and former DGP Shashi Kant were also present. Khaira appealed to the authorities to take a lenient view of Sikh extremists Jagtar Singh Hawara and Balwant Singh Rajoana. He said like Sonia, who had pardon Rajiv Gandhi’s assassins, “ we should also adopt the same approach towards Hawara and Rajoana.””

It is learnt that various Sikh groups have become active abroad in support of Khalsa. As many as 500 activists held a rally outside the Vancouver Art Gallery on Monday.

The organisers announced a relay fast in solidarity with Khalsa. Speakers urged boycott of Akali leaders visiting Canada. Jagdish Kaur, who lost her husband and a son during the 1984 anti Sikh pogrom, also spoke.

In Sacramento, the World Sikh Council America Region (WSC-AR) expressed concern at the developments and demanded an appropriate judicial review of the cases of Sikh detainees highlighted by Khalsa.

Amritsar: Akal Takht chief Giani Gurbachan Singh has called a meeting of high priests to deliberate on the issue of Gurbaksh Singh Khalsa at the Akal Takht Secretariat on Tuesday. Expressing concern over Khalsa’s health, he said the community needed brave persons like him.