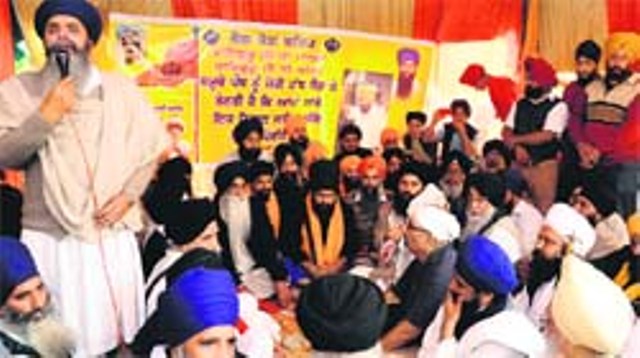 After years, spotlight back on Sikh detainees

Comments Off on After years, spotlight back on Sikh detainees 124 Views

Chandigarh, Punjab: Gurbaksh Singh’s indefinite fast for the release of former militants on “completion” of their jail sentence has brought to the fore legal issues, including legitimacy of their incarceration.

Their stay behind bars for offences allegedly committed decades ago may not be legal, after all. Available information suggests life imprisonment in Punjab has been interpreted as 14 years (counting both day and night). The stay of a convict in jail beyond the specified period can be taken as illegal detention, unless the courts have specifically mentioned that life imprisonment in case of a convict signifies natural life.

Whisked away by the police from Amb Sahib Gurdwara in Mohali after 20 days of fasting late last night, Gurbaksh Singh was seeking the release of six former militants, including Lakhwinder Singh, Gurmeet Singh and Shamsher Singh, sentenced to life for their hand in the assassination of then CM Beant Singh. Their conviction and sentence was upheld by a Division Bench of the High Court on October 12, 2010.

Justice Mehtab Singh Gill, heading the Bench that upheld the orders, says the three, on completion of sentence, are in “illegal custody”. He says they have been locked up for no less than 18 years though life imprisonment in Punjab means 14 years.

Justice Gill recalls that the CBI did not even seek the enhancement of their jail sentence, indicating that imprisonment for life was not sought for them.

Punjab’s former Director-General of Police (Prisons) Shashi Kant says a prisoner has to be released forthwith on completion of sentence. “They have not been sentenced to imprisonment for their entire life. If there is any legal hurdle, it should be explained to the common man, instead of bundling a protesting man in a police vehicle and taking him away,” he says.

Human rights activist-cum-lawyer Amar Singh Chahal says they have made several representations for the release of former militants, but in vain. Describing the release of convicts as the “prerogative of the executive”, he says there have been instances where convicts have been released even before the completion of life sentence.

A former Judge of the Punjab and Haryana High Court, Justice Sham Sunder, says its for the courts to decide whether a prisoner has undergone more than the prescribed sentence.

“The law relating to the release of convicts has been differently interpreted in different judgments. One of the Supreme Court judgments says it means the natural life of a lifer. Under these circumstances, the aggrieved convict can move the court,” he says.

A close examination of judicial files reveals that Patiala District Magistrate in 2008 did not recommend the release of convict Shamsher Singh on parole. The order said: “The statements of some well-known persons in the village have been recorded, who have submitted that convict Shamsher Singh was involved in the assassination of Beant Singh… If released on parole, he may again join a terrorist group.”

What the law says

* In the Swamy Shraddananda alias Murali Manohar Mishra versus the State of Karnataka case, the Supreme Court has asserted that sentence of life imprisonment, subject to remission, normally works out to a term of 14 years

* The Punjab and Haryana High Court, in the case of foreign nationals too, has asserted that no one can be kept in jail after the completion of sentence, not even as internee.