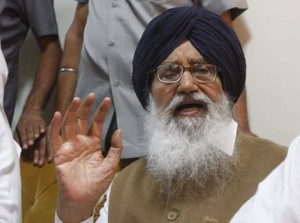 Activists challenge dismissal of case against Badal in US

Chicago, USA: A US-based Sikh rights group has challenged the order of a US court dismissing a human rights violation case against Punjab Chief Minister Parkash Singh Badal and for failing to serve federal court summons on him.

In a petition filed on Tuesday before the 7th Circuit Court of Appeals here, the Sikhs for Justice (SFJ) claimed there was irrefutable evidence that it was Badal who was served the summons on August 9 at Oak Creek High School in Wisconsin.

The SFJ alleged that Badal had tampered with the witnesses and evidence and obstructed justice. The plaintiffs’ families in Punjab had also been threatened with dire consequences by the Punjab Police, according to the group’s attorney Gurpatwant Singh Pannun.

It also asserted that Chicago-based Surinder Pal Singh Kalra’s claim that he was served with the summons instead of Badal was not credible.

An affidavit by Shiromani Akali Dal (Amritsar) president Simranjit Singh Mann was also submitted alleging that families of plaintiffs Jeet Singh Aloarkh and Jagtar Singh were threatened by the Punjab Police coercing them to withdraw the case against Badal.

While dismissing the case against Badal last month, the court of appeals had given the SFJ the right to again file the lawsuit against Badal. The SFJ and SAD (Amritsar) have alleged that there have been several hundred cases of extrajudicial killings, police tortures and human rights violations against the Sikh community in Punjab during 12 years of the Badal rule (from 1997 to 2002 and from 2007 to present).

The Sikhs for Justice alleged that Badal had tampered with the evidence and obstructed justice. The plaintiffs’ families in Punjab had also been threatened with dire consequences by the Punjab Police, it maintained.