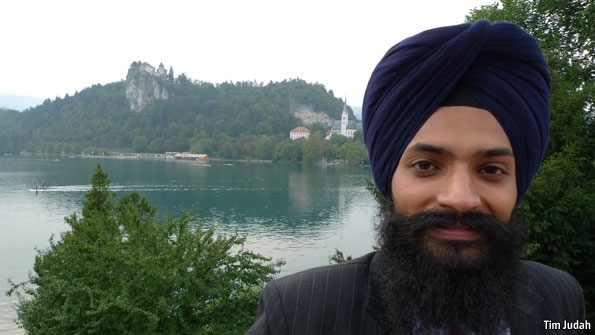 A Sikh in Slovenia

Comments Off on A Sikh in Slovenia 74 Views

AT first glance of his business card you could be forgiven for thinking that he is called Marmorni Obok, which would be an unusual name for an Indian Sikh as it means “Marble Arch” in Slovene. In fact Mehtab Singh’s name is written in very small type in the top corner of the card and this is the name of his company. He wanted it to be called Marble Arch, but when he registered the company, here in Slovenia, he was told that it had to have a Slovene name. Its logo is that of the London Underground with Marmorni Obok in the middle, just like Marble Arch tube station.

Trying to get an English name of his company registered seems to have been one of the few problems Mr Singh, who is 27, has had in setting up the European arm of his family’s company in Slovenia. Back home in Ludhiana, Punjab it employs some 200 people producing teas and cosmetics including facemasks, shampoo and conditioners. Large foreign companies have found it notoriously difficult to set up shop in Slovenia, but not Mr Singh.

“It took me 20 minutes to register the company,” he says. To get all the paperwork together in India to do what he has done here, he says, would take five years. And not just that. People have ideas and offer him help, not least the municipality in Kranj, where he has opened his business, to import and manufacture some of the same products as the company back home.

Mr Singh cuts a striking figure as he is, quite possibly, the only Sikh in Slovenia. What he has to say about the country and why he came here in 2011 provides an interesting insight into why he decided to open up the European market for his business here, apart from costs. It is all about reputation. First of all, he says, Indian and Chinese companies in his line of business have a declining reputation when it comes to product standards. He recounts how in 2010 the European Union banned Indian honey because of cases of adulteration.

A frequent visitor to Slovenia before moving here, Mr Singh says that if he tries to sell his products in the former Yugoslavia, Romania, Bulgaria or even Norway, the “Made in Slovenia” brand really counts for something. “I am also planning to go into Russia and there too it [“Made in Slovenia”] has a value, but so does anything made in Europe and Europeans are not using their reputation to its full extent.”

To date Mr Singh has seven employees, though only two of them are actually Slovene. He wants young people because “they are faster” and finds that young Bosnians and those from other parts of the former Yugoslavia are more amenable to hard work than young Slovenes.

Today Slovenia’s economy is under extreme pressure and its banks are teetering on the edge of bankruptcy but Mr Singh does not seem unduly worried. Referring to his teas he says that for a population of just over two million Slovenia has an awful lot of places that serve tea. According to their statistical office there are 5,103 cafés, restaurants, cafeterias and other places registered which can serve tea. This means that there is roughly one for every 402 Slovenes, which makes for fertile ground for a pioneering Indian venture.