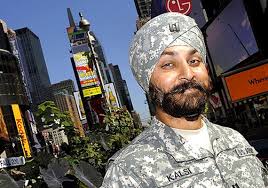 A Sikh American soldier’s battle for the turban

Washington, USA:  July 21 (IANS) “If the militaries in Canada, England, India and progressive nations allow Sikhs to serve in turbans and beards, then why can’t the US?”

That was the question that Major Kamaljeet Singh Kalsi, the first Sikh soldier in a generation allowed to keep the articles of his faith, posed to his commanders back in 2009 when he was told that he cannot wear his turban and beard while in service.

Eight years earlier when he joined the US army he had spoken with the recruiters and “they said ‘it’s not an issue, not a big deal’ because they had seen other sardars in service,” Kalsi told IANS on phone from Fort Bragg, North Carolina.

Before the policy change in 1981 there were many Sikhs who served in all the branches of the military all the way from early 1900 and many serving Sikh soldiers were grandfathered in, he said naming two retired officers, Col G. B. Singh and Col Sekhon.

But Kalsi’s commanders agreed to put in a request for a waiver up the chain of command. “They afforded me a very amicable process, though a very lengthy one with a large amount of paperwork.”

He finally won an accommodation from the Pentagon in 2010, went on active duty at Fort Bragg and was deployed twice in Afghanistan, where he went on to win a Bronze star for service and a NATO commendation.

Since then, two more soldiers, Captain Tejdeep Singh Rattan, a dentist and Specialist Simran Preet Singh Lamba, an army medic, have received waivers from the Army.

The Army raised three concerns, whether he could wear a gas mask and a helmet and whether it would affect his “unit cohesion” or esprit de corps. Kalsi said he met all their concerns by wearing a helmet over his long hair wrapped by a ‘patka’ or sport bandana.

“Never have I faced any problem or issues with my fellow soldiers,” said Kalsi, 36, a father of two children, who is currently the medical director of emergency medical services at Fort Bragg.

“We have sort of proven the concept that we not only make good soldiers, but great soldiers,” added Kalsi, who is now waging a new campaign to get the rules that have prevented hundreds of Sikhs from joining the military repealed once for all.

As part of the campaign, the Sikh Coalition, a community advocacy group, is engaging members of the US Congress and has launched an online petition to the White House.

“Now the time has come for a broader policy to be adopted,” said Kalsi, who would in September join the Army reserves for the next couple of years.

“It’s not acceptable that we look at it on an individual basis because the amount of effort that’s required becomes a barrier to service, becomes an obstacle.”

“Basically we are being kept from being fully integrated with our communities here,” Kalsi said.

Incidents like the Aug 5, 2012 Oak Creek tragedy when a white supremacist shot to death six Sikh worshippers in a Wisconsin gurdwara could have been prevented if there were more Sikhs serving in the military, police or fire services, he said.

“If a Sikh rescues your daughter, you’re not going to feel any animosity towards that person. You’ll say, “Wow that guy is a hero and is really part of my community.'”

“That’s the level of integration I am looking for,” said Kalsi, whose parents came from India in 1978 when he was just two and spoke “Hindi, Punjabi and a little bit of English too.”

“The time has come for us to serve in our military, go into politics, and do all the wonderful things that it means to as an American,” said Kalsi who calls New Jersey, where he grew up, home.

Previous: Sikh Temples in England Advised to Beware of Same-Sex Unions
Next: Construction to begin on Greenwood Sikh Temple