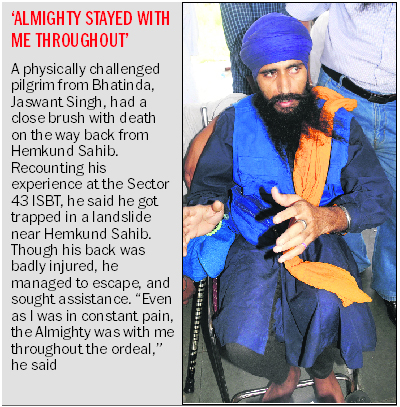 Chandigarh, Punjab:  JWe have got a second birth. These were the repeated words of several survivors who were brought back from Rishikesh on the Punjab Roadways and PRTC buses to the Sector 43 ISBT today. Over 900 pilgrims, rescued from Hem Kund Sahib and other places, reached Chandigarh today. From there, they were sent to different parts of Punjab through free transportation facility arranged by the Punjab government.

While recounting his experience, Jaswinder Singh (28), from Mansa, said he was still in a shock having seen the massive destruction in several parts of Uttarakhand. Children and women were worst affected, he said.

“We remained trapped in Govind Dham, about 5 km from Hemkund Sahib for four days. It was through a rope bridge running above the flood-swollen river that several pilgrims were evacuated,” he said.

Jagdeep Singh from Ganganagar, Rajasthan, said the rescue operation was very slow. Despite 5,000 passengers being trapped between Govind Ghatt and Hemkund Sahib, around 300 pilgrims were being airlifted every day.

First three days, said 59-year-old Jaswant Singh from Mohali district, were very difficult. Trapped in Govind Ghatt, he and others had to survive on rainwater, since food and other necessary items did not reach there on time, he said.

“It was only after we reached Joshi Math that we were given warm clothes and proper food,” said Jaswant.

Hirdeypal Singh from Hoshiarpur said that though there was no major causality at Hem Kund Sahib, people were now distressed and it would take them a long time to recover from it. He said the management of Gurdawars in and around Hem Kund Sahib was very bad.

Nineteen-year-old Manjot Kaur from Ludhiana said the family had lost all hopes of returning safely on seeing pilgrims being washed away in the flash flood. Reaching Chandigarh was a major relief, she said.

“We pray for all the other stranded pilgrims and hope they too reach home safely,” said another survivor, 42-year-old Jaspreet.

The mood was sombre at the bus stand as the survivors were returning back. Many broke down meeting their close ones.

So far, over 5,000 rescued pilgrims have arrived at ISBT-43 in the past 5-6 days, said PRTC Inspector Mangat Khan. He said as more pilgrims from Punjab were reaching Rishikesh and Dehradun after being rescued from different parts of Uttarakhand, their buses were bringing them to Chandigarh.

Around 60 buses have arrived with survivors and 30 buses are still parked in Rishikesh to bring back the rescued pilgrims, he said.

‘Almighty stayed with me throughout’

A physically challenged pilgrim from Bhatinda, Jaswant Singh, had a close brush with death on the way back from Hemkund Sahib. Recounting his experience at the Sector 43 ISBT, he said he got trapped in a landslide near Hemkund Sahib. Though his back was badly injured, he managed to escape, and sought assistance. “Even as I was in constant pain, the Almighty was with me throughout the ordeal,” he said