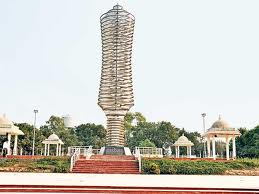 8 years on, martyrs’ memorial in Muktsar yet to come up

Comments Off on 8 years on, martyrs’ memorial in Muktsar yet to come up 120 Views

Muktsar,Punjab: To appease the Sikh community, the ruling SAD has constructed a number of Sikh historical monuments, including Virasat-e-Khalsa in Anandpur Sahib, Wadda Ghallughara in Sangrur, Chota Ghallughara in Gurdaspur and Fateh Burj in Chappar Chiri. But no progress has been made with regard to a martyrs’ memorial (dedicated to Mai Bhago and 40 Muktas) on the Tibbi Sahib road in Muktsar whose foundation stone was laid on May 4, 2005.

The then SAD president Parkash Singh Badal and the then SGPC chief Bibi Jagir Kaur had laid the stone of the memorial.

Since then a number of meetings have been held in this regard by SGPC members, but the memorial is nowhere in sight.

Last year, SGPC president Avtar Singh Makkar had claimed that the construction work would be completed before Maghi in 2013, but the fate of this proposed memorial is still unclear.

Earlier, there was a plan to change the location of the memorial, but that did not materialise.

Makkar said: “The memorial will come up within a short period. A committee formed in this regard is working on its design and after its finalisation, the construction work will begin”.