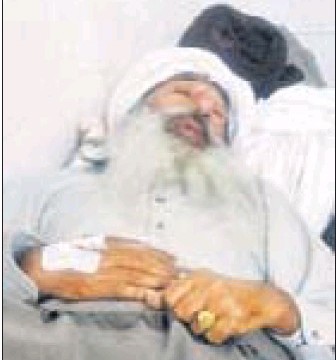 4 hospitalised after taking ‘prasad’ from strangers at Harmandar Sahib

Amritsar, Punjab: Four pilgrims were hospitalised after consuming ‘prasad’ taken from strangers that was apparently laced with a poisonous substance at Harmandar Sahib here on Monday.

The ‘prasad’ was distributed to the four by two strangers in the ‘parikrama’ of the shrine. It was not the traditional ‘parsad’ distributed by the SGPC sewadars inside the shrine.

The four started feeling giddy and three of them fell unconscious 10 minutes later. They were rushed to two hospitals in the city, where they were treated for food poisoning.

The condition of the three admitted to Hartej Hospital has stabilised; the fourth is admitted to the ICU of Amandeep Hospital.

The three at Hartej Hospital were identified as Balwinder Singh (68), Lakhbir Singh (60) and Sukhdev Singh (62). All are from Kota in Rajasthan and had come to the city for a relative’s marriage.

The one in the ICU was identified as Harwinder Singh, who hails from Muktsar.

Lakhwinder Singh, a relative of the Kota residents, said he was also accompanying the three but did not take the ‘parsad’ as he was at a distance from the strangers distributing it.

He said the three started feeling giddy after sometime and fell unconscious when they reached their hotel at Civil Lines.

“We rushed them to the hospital. Thank god that they are safe,” he told the media at Hartej Hospital.

The three later made it clear that they took it from two strangers near Beri Baba Buddha Sahib in the ‘parikrama’ of the shrine. They said they did not take the ‘prasad’ from the SGPC sewadar.

Senior police officials reached Hartej Hospital and recorded the statements of the three and of their relatives. SGPC officials also visited the two hospitals.

“We will scan the CCTV footage from the shrine to identify those behind this,” a senior police official said.

SGPC secretary Dalmegh Singh said it was a serious incident and they would give all help to the police to nab the culprits. He said the CCTV footage would be provided to the police.

“We repeatedly issue warnings through the PA system and through our sewadars asking devotees not to take ‘parsad’ from anyone other than the SGPC sewadars. Now, we will further tighten our surveillance inside and outside the shrine,” said Dalmegh.

A few days ago, a couple of devotees had fallen sick after consuming ‘langar’ organised by private persons outside the shrine. The SGPC is already probing this incident.