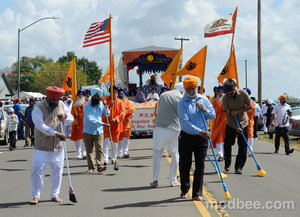 Comments Off on 3,500 gather in Livingston to witness Sikh tradition 518 Views

Livingston, California:  The threat of rain didn’t put a damper on the 15th annual Sikh parade, which took over the streets of Livingston on Sunday afternoon.

More than 3,500 people lined the streets, hailing from Fresno, Tracy and the Bay Area, to catch a glimpse of the Hola Mohalla — or “mock fight” — a tradition dating back more than 300 years.

“We thought we were going to get less people because of the storm, and we were a little concerned,” said Livingston Mayor Pro Tem Gurpal Samra, who helped organize the event. “But the show goes on, rain or shine.” Samra said this year’s procession had a bigger turnout than last year.

In addition to the display of sword-fighting and colorful Sikh clothing, attendees also got a taste of many traditional food dishes.

“You don’t go hungry at these events,” Samra said with a laugh.

The parade lasted about four hours, beginning at noon at the Gurdwara Sahib Temple at 2765 Peach Ave., then moving along Main Street to the Guru Nanak Temple on B Street.

Samra said the event isn’t only for Sikhs, but for all in Livingston and beyond.

We always make an attempt to invite everyone. We want them to be part of the event,” he said. “It’s not just for us. It’s for everybody in the community.”

Samra thanked the residents of Livingston for helping organize the procession, as well as law enforcement for its support.

Livingston Police Chief Ruben Chavez said Sunday was his second time attending the Sikh parade and called it inspiring. “The whole community comes together, and it’s all about honoring their faith,” Chavez said. “But it’s also a festive atmosphere with the families and the food.” Chavez said representatives and volunteers from the police department attended the parade, including six officers. “It’s important for me to be out here to support the department, but also the Sikh community,” he said.

Sikhism is a religion that was founded in India. It has 27 million followers, with more than 5 million of them living outside India. Sikhs make up nearly 20 percent of Livingston’s population.