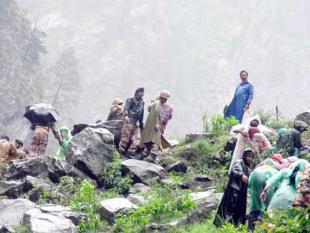 Uttrakhand, India: According to recent reports about 3,000 Sikh pilgrims who were stuck for the past many days at Hemkunt Sahib have been successfully evacuated. These pilgrims were stuck there after the Uttrakhand state of India witnessed heavy rainfall, foods and land-slides.

According to vice-chairman of Shri Hemkunt Sahib Management Trust (SHSMT) N.S. Bindra nearly 600 persons were air-lifted this morning. While the remaining nearly 2,300 pilgrims were evacuated by road after jawans of Indo-Tibetan Border Police (ITBP) constructed a temporary bridge across the river.

He said, “All the pilgrims at Hemkunt Sahib have been brought down to Gobind Dham in Gagria village from where they would be sent to Joshimath”.

“Except for a few drivers and staff members, the entire Hemkunt Sahib complex had been evacuated”, Bindra added.

Previous: Sikh politics to fore in Delhi, Cong, BJP in a spot
Next: Forum demands stay on execution of Bhullar